Average Rating : 4.04
Total Vote(s) : 23
Please rate this song between 1 star and 5 stars (5 stars being the best). Just move your mouse on the stars above and click as per your rating. Your rating will really help us to improve our website. 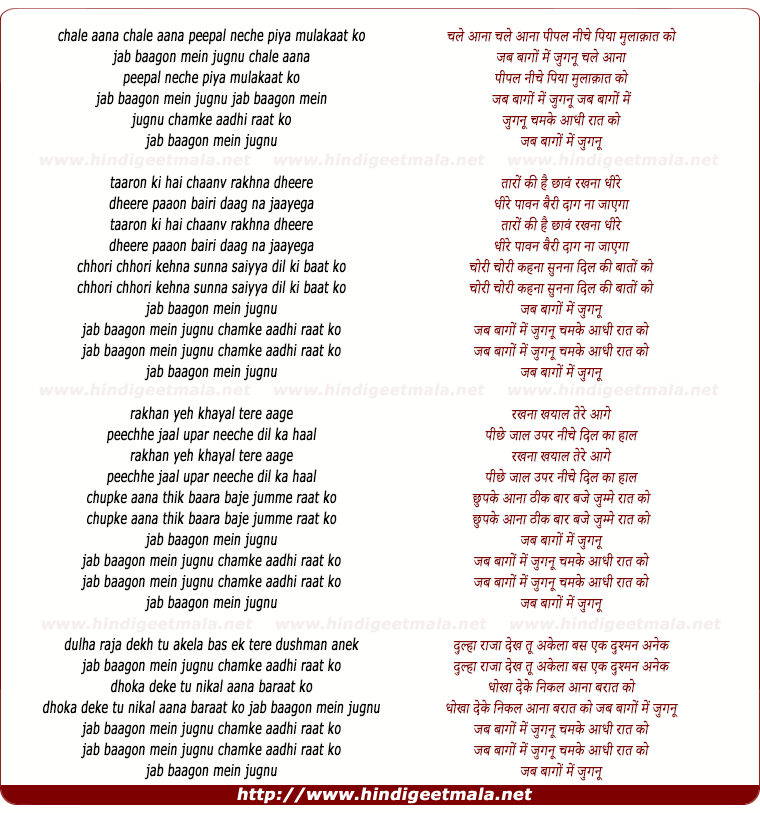 Comments on song "Jab Baagon Mein Jugnu"
UsherRed on Wednesday, February 27, 2008
This is my all time favorite Jayshree T. song from the film "Jugnu". All of the songs from the film were and still are a hit and this one is certainly not an exception.
I love Jayshree T.! She's such a cute actress, fit for the feisty roles which she was cast most of the time to perform. She truly is very underrated. She needs to get more recognition for what she has done.

Thank you so much for the amazing upload:)

hamekasia on Sunday, March 16, 2008
I agree with you, UsherRed. She certainly gave the movies she was in extra energy and charm, even if she often only had a minor role. I didn't particularly like this movie though.
UsherRed on Tuesday, March 18, 2008
Glad to know we're on like terms:)
Yes, she gave that extra "oomph" to the entire film. Too bad she was always cast as an "it" girl and not as a heroine. Either ways, she was great at what she did. Truly underrated actress:)

baghwaan on Wednesday, November 12, 2008
jayeshree t was sooo beautiful she had beautiful large eyes and also great dancer
lamtoroful on Friday, May 28, 2010
my first film iv'e seen at cinema
when i was 12 in senegal
wow !!!great!!!