Video of this song from youtube
Average Rating : 4.29
Total Vote(s) : 38
Please rate this song between 1 star and 5 stars (5 stars being the best). Just move your mouse on the stars above and click as per your rating. Your rating will really help us to improve our website. 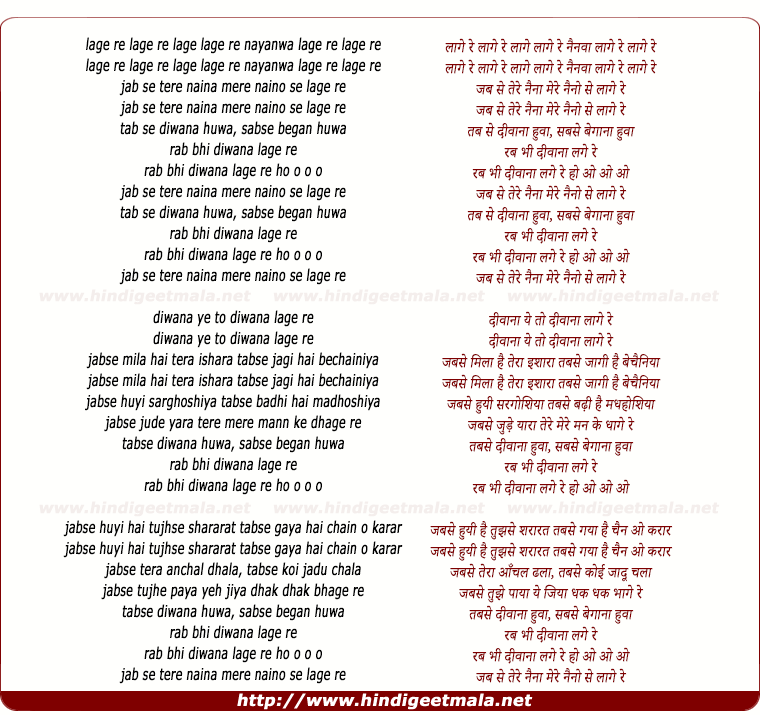 Comments on song "Jab Se Tere Naina Mere Naino Se"
themanat315 on Tuesday, January 12, 2010
it s not a great movie but the songs are wonderful i enjoy the songs alot
they are my fav the story is basically he falls in love with her but she is
actaully in love with suliman khan so she waits for him almost everynight
during the end when he finally comes he see that she rans to suliman khan
instead of him so he goes to rani muakerji and asks her to marry him but he
diagree's and thinks he's gone nuts basically thats like that story...
your welcome


Tia O on Friday, November 12, 2010
@swankie101 4. Since when I did this mischief with you, since then I have
lost my peace... Since I saw your aanchal (piece of cloth) flying, since
then some magic happened... Since I have got you my heart started running
fast Since then I've became crazy... unaware about my surroundings Even God
seems to be crazy about you...

iftekhar hossain on Saturday, March 08, 2008
Sanjay Leela Banshai got this song completely. It is a great track, Ranbir
is competent and has screen presence, and i am all for sensuality on screen
but this was made in such a 'Gay' way that it spoils the inherent charm of
the song. It should have been picturised in a different way. Its corny and
gay.