Video of this song from youtube
Average Rating : 4.16
Total Vote(s) : 190
Please rate this song between 1 star and 5 stars (5 stars being the best). Just move your mouse on the stars above and click as per your rating. Your rating will really help us to improve our website. 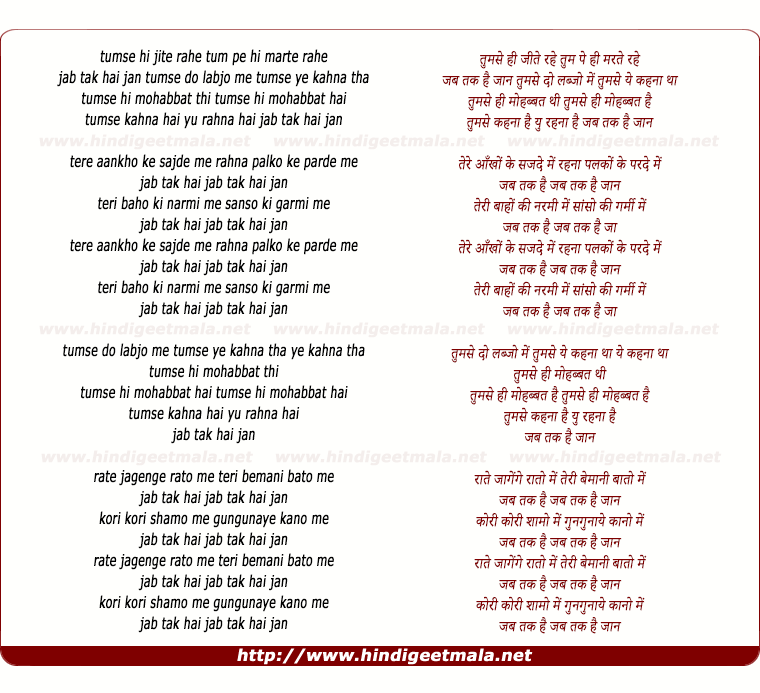 Comments on song "Jab Tak Hai Jan Teri Baho Ki"
manoj kumar on Thursday, November 08, 2012
listening to this song over and over again and again again again again ..
shreeram chaulagain on Wednesday, October 17, 2012
i still remember when we first met and the time passed slowly and i started
liking u...god knows what u thought about me bt what i thought about u is
the same today as it was from starting...this song gives me the same
feeling as i used to think about u.much more time i think about u and i
know u r too far from me today and still i m in love with u .i knw its
harder to get u now bt still "tum se hee mohobat thee,tum see hee mohobat
hai"..and this song is just dedicated to u.luv u more:( :(

CLontheDL411 on Friday, December 07, 2012
Oh yes & there are more and more of us every day! I own about 55 of his
DVD's, plus books& collectibles.Several of us are followers of SRK on
Twitter, too.We r all at different stages of learning Hindi, but I know
enough now that I can watch a Bollywood movie w/o subs & get the basic
understanding.(I still see them w/subs 2 to get every nuance of the dialog)
I also make fanvids & have translated some songs & stuff on my SRK fan
channel 4MYLalways ; D I will comment from there so u can see!

RacingLights on Sunday, October 28, 2012
Ya Wikipedia says that, but how did Shahrukh and Katrina already go to the
Swiss Alps with the whole filming crew and back? If shot the entire song in
Switzerland don't you think it would be all over the internet? If they shot
the song and it's true I guess it was in some next place lol if they didn'
t shoot it at all then whatever. Hopefully they work it into the movie
though. I don't want it in the credits at the end cuz then no one's gonna
stay back and listen to it in the theater.

daintellekt on Wednesday, November 14, 2012
Saw this movie yesterday - poor screenplay and script, cliched with nil creativity. SRK days as lover boy is finally over - the movie is about two ladies and SRK has a side role. The heroines have lengthy role and they have performed very well. Plots are silly and first half very boring. There is absolutely nothing new in the movie. The heroines falling for SRK is not at all convincing and there the story completely fails.