Video of this song from youtube
Average Rating : 4.20
Total Vote(s) : 120
Please rate this song between 1 star and 5 stars (5 stars being the best). Just move your mouse on the stars above and click as per your rating. Your rating will really help us to improve our website. 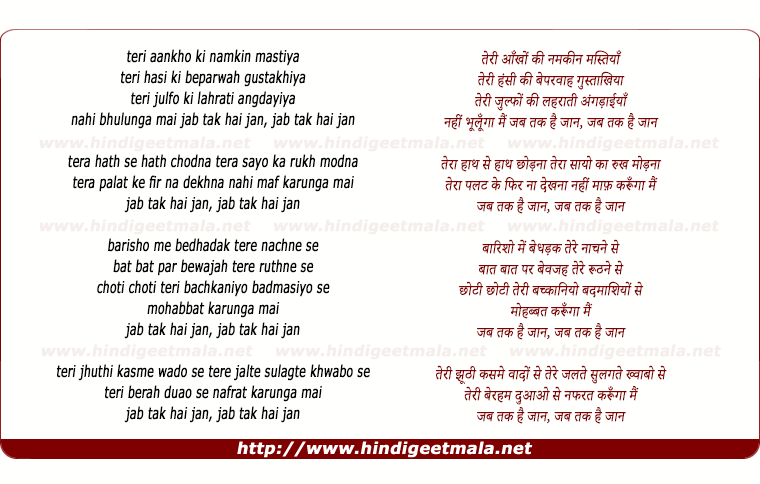 Comments on song "Jab Tak Hai Jaan (The Poem)"
Baadshah192 on Tuesday, November 27, 2012
aditya wrote it beautifully.SRK narrated even btr
Da Brat on Monday, December 03, 2012
There is only one Number 1 Superstar in every generation. Dilip Kumar, Dev
Anand, Rajesh Khanna, Amitabh Bacchan..although there have been other
stars too during their reign...but Number 1 only them. Shahrukh khan has
been the Number 1 Superstar of 2 generations now.not just of the
decade...but of the century. The amazing part is that he has been the
Number 1 Superstar for both 20th and 21st Centuries. He is the "Saans" of
Bollywood and Indian film industry.

WestSide4LifeTupac on Thursday, November 29, 2012
I wish yrf would somehow find a way to get either salman and aamir or aamir
and srk to make a movie together it would be the movie of the ages,
generations would remember.

Mansa Sukheja on Monday, December 03, 2012
You're just typing without anyone paying attentiooooooonnn. I hope I made
that clear enough since no one cares about your hate. Not gonna affect us
SRK lovers.

Carla Vanessa on Monday, November 26, 2012
Wowww!! Shahrukh is the best. I dedicate to my Big love Suneel,You change
My life. I Love you so much My Suneel. Thanks to Love me everyday more. ♥