Video of this song from youtube
Average Rating : 4.35
Total Vote(s) : 75
Please rate this song between 1 star and 5 stars (5 stars being the best). Just move your mouse on the stars above and click as per your rating. Your rating will really help us to improve our website. 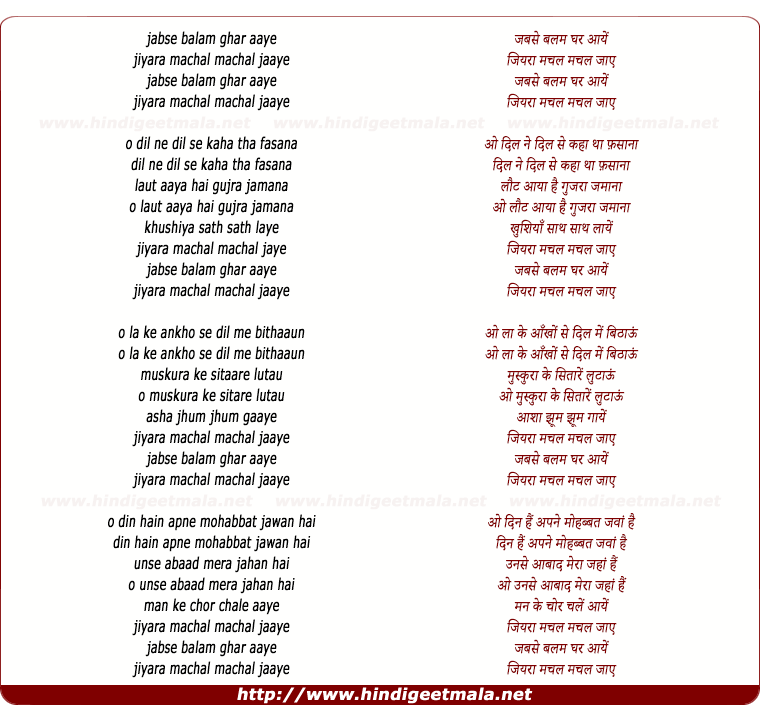 Comments on song "Jabse Balam Ghar Aaye"
Pinak Lonkar on Thursday, December 18, 2014
I am so glad Lata Mangeshkar (through coaching and advice) managed to move
on from this absolutely annoying nasal voice she used in her early years
inspired by the incumbent of that era. Her "real" voice that the world
later came to hear turned out to be absolutely pure and golden. Imagine the
new heights this impeccable song would have reached if Lata didn't sing it
this way. ﻿

Ramesh Thakrar on Friday, May 17, 2013
Shankar Jaikishan were one of the most popular musicians of their time
along with Kalyanji Anandji. All songs of Awaara were very popular.

gopal sinha on Thursday, May 23, 2013
SJ were in terrific form those days...so many qwality and memorable songs
were composed by the leading pair of music director..

Ramesh Thakrar on Thursday, September 04, 2014
I hate the adverts before the song, They are so loud and annoying! They
mar the enjoyment of the songs.﻿