Video of this song from youtube
Average Rating : 4.03
Total Vote(s) : 306
Please rate this song between 1 star and 5 stars (5 stars being the best). Just move your mouse on the stars above and click as per your rating. Your rating will really help us to improve our website. 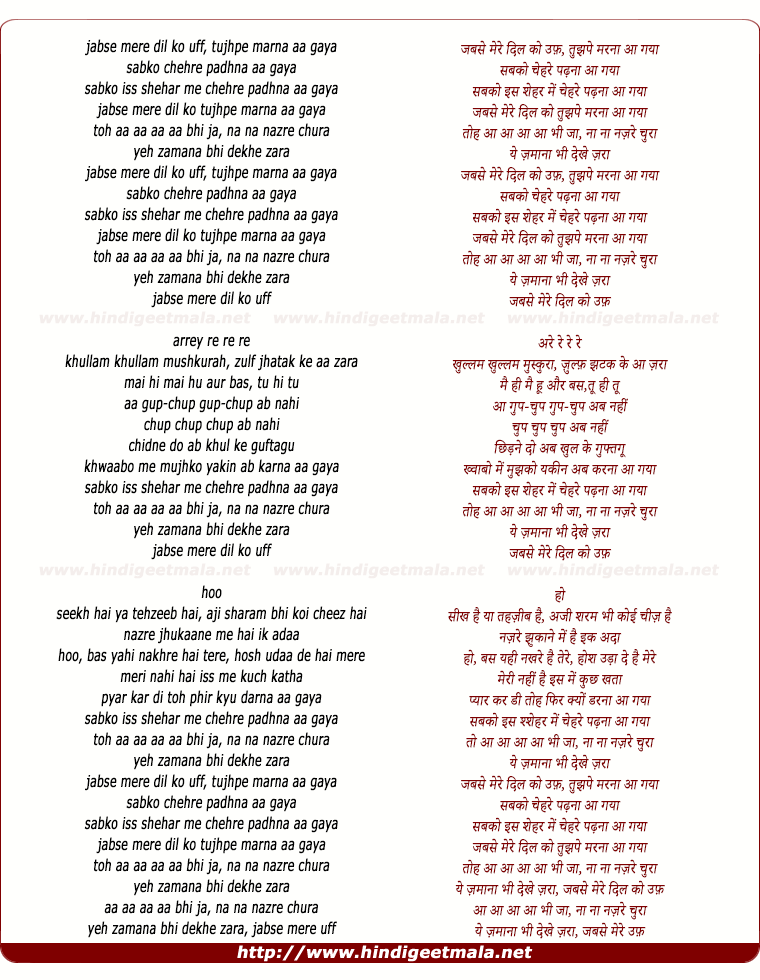 Comments on song "Jabse Mere Dil Ko Uff, Tujhpe Marna Aa Gaya"
Assr2525 on Sunday, June 24, 2012
What a song, Sunidhi Chauhan and Sonu Nigam have always been Great Vocalists. Sajid-Wajid have created a marvelous composition and Prasoon Joshi of Chand Sifarish has also wrote beautiful lyarics of this song.. Love this song...
DrIndira Chakraborty on Thursday, May 24, 2012
OH,Romance at its height.those stolen glances,the slight
closeness,the rubbing of the noses,O God desperately want to trade place
with PC if only just in pillar scenes.SHAHID,i'm speechless.No amt of
bedscenes can bring such a high that SHAHID can bring to any girl with his
AWWWSOOOME moves,facial expression of love& want.OOO he's such a born
natural lover.Can't believe this guy is single. BW girls & women r just
BLIND to GENUINITY.They live in fake world & get drowned in them.SHAHID!!!!!

Ali Ahmed Awan on Monday, June 11, 2012
Shahid kapoor is a really great dancer of course he is one of the best
dancer in Bollywood and he is a very good actor and he may some day become
as good as SRK, but right now he cannot act even close to SRK's level, SRK
is not a dancer he is an actor and acting is a total different platform, U
will not say johnny depp is not good actor bcz he can't dance so take a
chill pill, and for your kind information shahid do copy SRK or lets say he
is inspired from his acting and u can observe this fact

bunneh87 on Saturday, July 07, 2012
uhuu THATS proof, serously Im not joking around I litteraly see girls like
her everyday, with better attitude and I almost never see girls like
Priyanka: dropdead gorgeous, amazing lips (fake or not), talented and she
is STILL down to earth. The only reason she is voted hottest girl whatever
is because she is half white and we all know India is obsessed with white
people, whether they're ugly or not. Im not saying katrinna is ugly, but
she doesnt strike me in ANY way

bunneh87 on Wednesday, July 18, 2012
I didnt ''feel'' he copied it it is the truth if you have ever watched
hindi films before the 90s you would agree. And going in discussion with
doesnt mean I dont respect your opinion. If you cant handle my way of
commenting on your comment than stop posting comments. You are acting like
little girl really .. thats MY OPINION. And if you cant handle a joke than
you shut cry in a corner with you baby blanket.. just saying