Video of this song from youtube
Average Rating : 3.98
Total Vote(s) : 182
Please rate this song between 1 star and 5 stars (5 stars being the best). Just move your mouse on the stars above and click as per your rating. Your rating will really help us to improve our website. 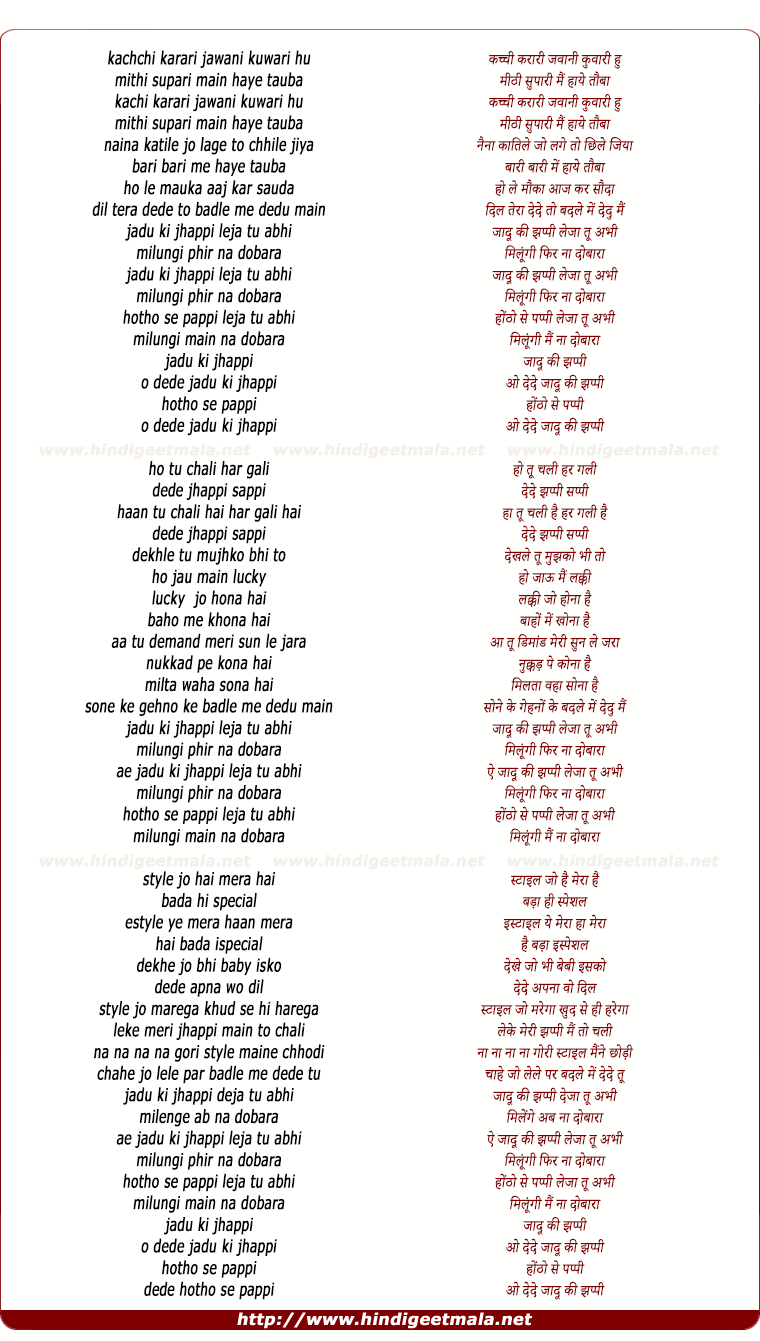 Comments on song "Jadoo Ki Jhappi Leja (Part - I)"
SuperInsane777 on Sunday, July 07, 2013
HEY YOU ALL MUST HAVE TO SEARCH THIS CHANNEL "shubham3654" 1) He is Indian
Rapper, big surprise 2) In my opinion he is the hardest working guy 3) If
you search his channel "shubham3654" then you will see how much people hate
him but still this guy upload his rap songs and stand tough 4) He has dream
to be a greatest rapper in this world, it’s very difficult for him because
English language is not his primary language but still he try 5) This guy
is the true inspiration for us 6) I'M HIS FAN

Ram Sagar on Tuesday, December 03, 2013
HEAVENLY GORGEOUS B.E.A.U.TIFUL SHRUTI HAASAN !!! A must watch movie!!! If
you are romantic at heart you'll love this movie ,if not,then you should
watch it for SHRUTI HAASAN alone, she's GORGEOUS as HEAVEN. After her movie
'luck', I was waiting for her to be cast in another hindi movies, and
finally lord has answered my prayers. ya.. ya.. I know critics and you'll
say that this is a 'maine pyar kiya' remake and we all have watched this
stuff numerous times "been there done that" but still this movie makes you
feel for the characters,and it has its own charm, even the HERO is charming
and lovable, SO GO AHEAD AND WATCH THIS MOVIE, then you'll know what I mean﻿

Hasi R on Tuesday, July 02, 2013
Jacqueline is half Sri Lankan and half malaysian. So, she is half our race
(Sri Lankan). Do you research before you say things like "she is not from
their race." It is true that many Sri Lankans are not milky-white skinned,
however,we are not all dark skinned either. I doubt that 80% of "Indian
girls" have fair milky white skin. If you think that you are delusional.
Plus, why is skin color such a huge thing? Are you saying that fair skinned
people are superior to dark skinned people?

Mithun Gangolli on Thursday, July 04, 2013
Sri Lankas are quite attractive . I have seen many in my life.. And some
are very very attractive. But if you Sri Lankans come on a Bollywood video
to brag about Jacqueline being hot and beautiful because she comes from Sri
Lanka, you are indirectly trying to insult India and Indians. She is hot
and that is the reason she is in Bollywood. Indians welcome everyone and
the least you guys can do is show a bit of respect towards India and
Bollywood!

Jessica Badeaux on Saturday, July 13, 2013
Excuse me but I was replying to someone else's comment and I just got
through saying I'd never upload myself doing that online or anywhere else.
I was simply saying that it doesn't take a rocket scientist to shake your
ass like that and it's an old trick. The person whom I was actually
speaking to was interested in learning how to do it so I said look up a
tutorial video. What is wrong with you dude? You real way to into things.