Video of this song from youtube
Average Rating : 3.94
Total Vote(s) : 109
Please rate this song between 1 star and 5 stars (5 stars being the best). Just move your mouse on the stars above and click as per your rating. Your rating will really help us to improve our website. 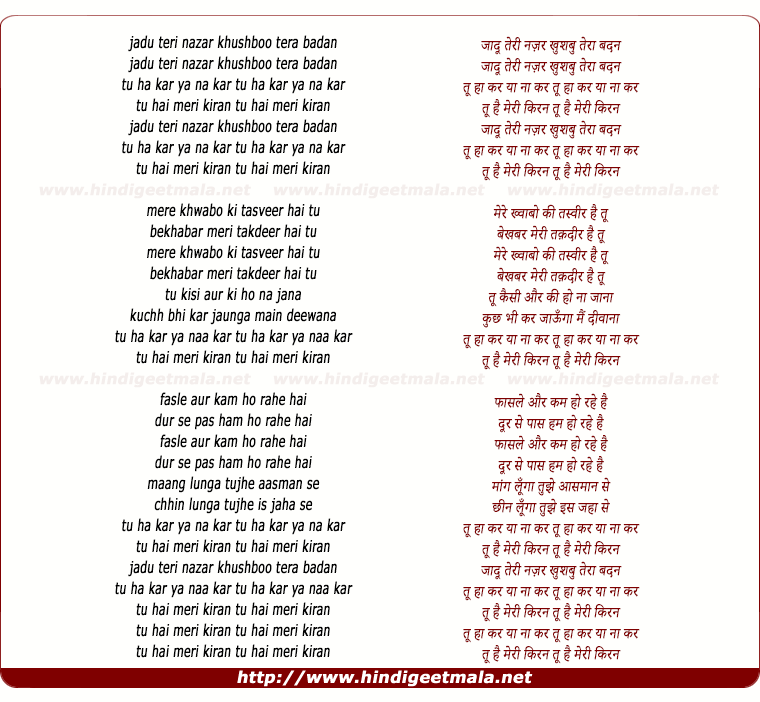 Comments on song "Jadu Teri Najar, Khushbu Tera Badan, Tu Ha Kar Ya Na Kar"
wizman009 on Wednesday, September 22, 2010
@chaliraza89
Agree, the song is very good. The best thing is the way it's picturized. We never had such a song before probably...

gsingh050 on Friday, July 23, 2010
For first couple of seconds when u started singing ,I knew the song sounded different but I could not tell what was different . Great job dude
kido4gab on Friday, November 05, 2010
Wow, Great singing man. Can you tell me from where you got the karaoke mp3 for this song? Please I would appreciate if you help me
LaBoniitaa on Monday, June 08, 2009
haha Yea meee tooo, i really want to see him in movies like lead roll of
course.. he's just the best:)