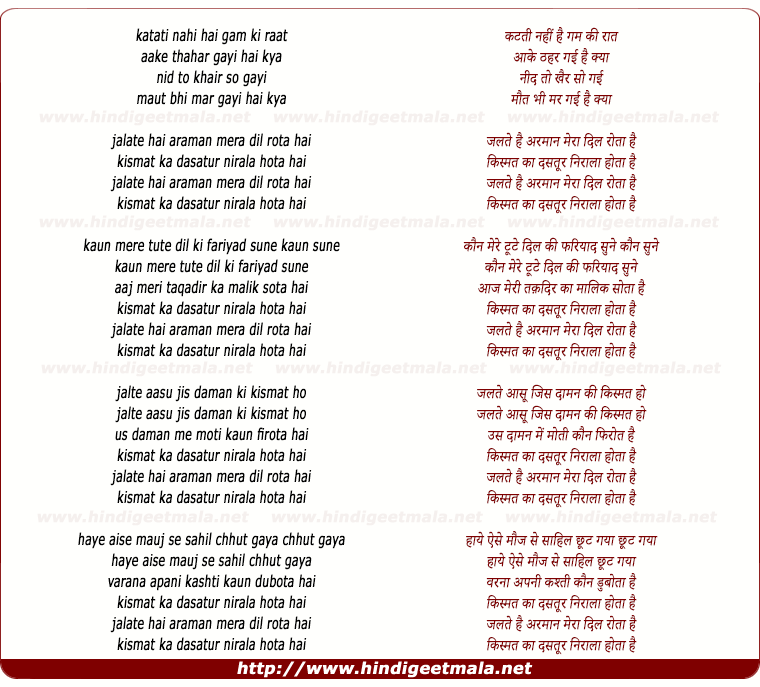 Comments on song "Jalate Hain Aramaan Meraa Dil Rotaa Hai"
Zil Hasnain Kazmi on Tuesday, March 01, 2011
What a joint collaboration? and the result of these three great immortal
individuals had produced. I would call it a miracle. When ever I listen to
this melody I get tranquillity. I must salute you Master Inayat Sahib.
While making this immortaltune you compelled Late Noor Jehan to make you
proud. What a piece...no words, and Qateel Shifai Marhoom you are just
genius. May god bless you all with his blessings and rest your soul in
peace. Jimmy sahib I am short of words. (01 March 2011)

MAYOGARDENS on Wednesday, September 07, 2011
Greatest of all the great singers who was also exceptionally beautiful and
great gifted actress. None other than Noor Jehan who was the noor of
lollywood. No one would be ever like her. Lahori Munda From New York.

Milahi1935 on Friday, September 02, 2011
Another great masterpiece from the greatest singer of all times. She is
effortlessly going into the higher notes and would have gone higher but for
the music composer chickening out and not letting her do so.

Bajaury on Tuesday, December 11, 2012
Beutiful! you got to be kidding. She was the greatest but somewhere in the
late fiftees, when she was around 35, she lost he magic. She was like
broken drum.

Zil Hasnain Kazmi on Saturday, November 02, 2013
Centuries will pass before another voice of her calibre, elocution, style
and expressive emphasis on the emotional aspects of the lyrics will be
gifted to this planet again, she could naturally justify the poetic lyrics
and I think the poets created these inspired by her voice as they could
imagine her immortalising, their creations just as the composers did, there
is no match for Noor Jehan. May God bless her soul? 02-11-2013