Video of this song from youtube
Average Rating : 3.50
Total Vote(s) : 6
Please rate this song between 1 star and 5 stars (5 stars being the best). Just move your mouse on the stars above and click as per your rating. Your rating will really help us to improve our website. 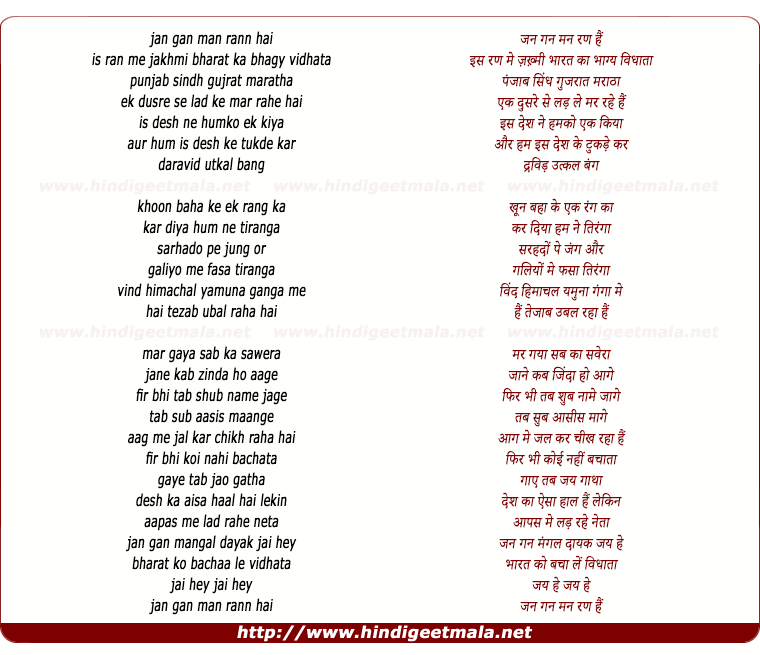 Comments on song "Jan Gan Man Ran Hai"
luciferkala on Tuesday, June 09, 2009
great song shows the true reality of r country. all those of u sayin that we r the confused indian generation look carefully at the situation of r country. there a crooks every where there is bribery, extortion and dishonor of women every where. those of u who r turning a blind eye r the ones who r confused u r the reason y all this is happening u r the equal cause of the state of r country.
were455 on Wednesday, September 08, 2010
I must say, Thank you Ram Gopal Varma for making such an eye-opening
movie...whilst me may not think it immediately, the fact that such movies
are being made only shows that the public are united against such
government corruption. And I would even say that such movies give rise to
the attitude which will eventually translate into action which will one day
hopefully mitigate the crippling venom of corruption that has been injected
into the everyday lives of ordinary Indians. Jai Hind!

JANUTHEBEST on Wednesday, May 27, 2009
WHY ARE WE TEMPERING WITH OUR NATION. ? he has just shown us the
reality. and brother what r you talkin about... pride, soul . the
song is sooo correct , everyone is tryin to divide us.. separate.. Kashmir,
give people khalistan, south indians want hindi to nomore be our national
language... east part of india need no explanation... thank god he's
made this movie. PEOPLE NEED TO BE AWARE OF WHATS GOING ON IN MY COUNTRY
i

Ameer Hussain on Tuesday, February 23, 2010
No religion is owned to a geographical area, nor does it teach to kill
mankind. All religions in world had born to teach people to give their best
side to humanity. Religion is an individuals acceptation towards the belief
on god and to choose a good way of life. As a friend I request you to look
people as humans before judging them with their religious background. I am
sorry if I have hurted you with my opinion.

Hiren Patel on Wednesday, May 13, 2009
yep i agree wid you guys... wonderfully sung and there is no imitation
of our national anthem. I wonder why wud RGV would and up into any kind of
problem. Must b a true depiction of present India but u cannot say
anything by just watching a music video.Should wait for movie to b
released. But the song is amazing...