Video of this song from youtube
Average Rating : 4.33
Total Vote(s) : 2200
Please rate this song between 1 star and 5 stars (5 stars being the best). Just move your mouse on the stars above and click as per your rating. Your rating will really help us to improve our website. 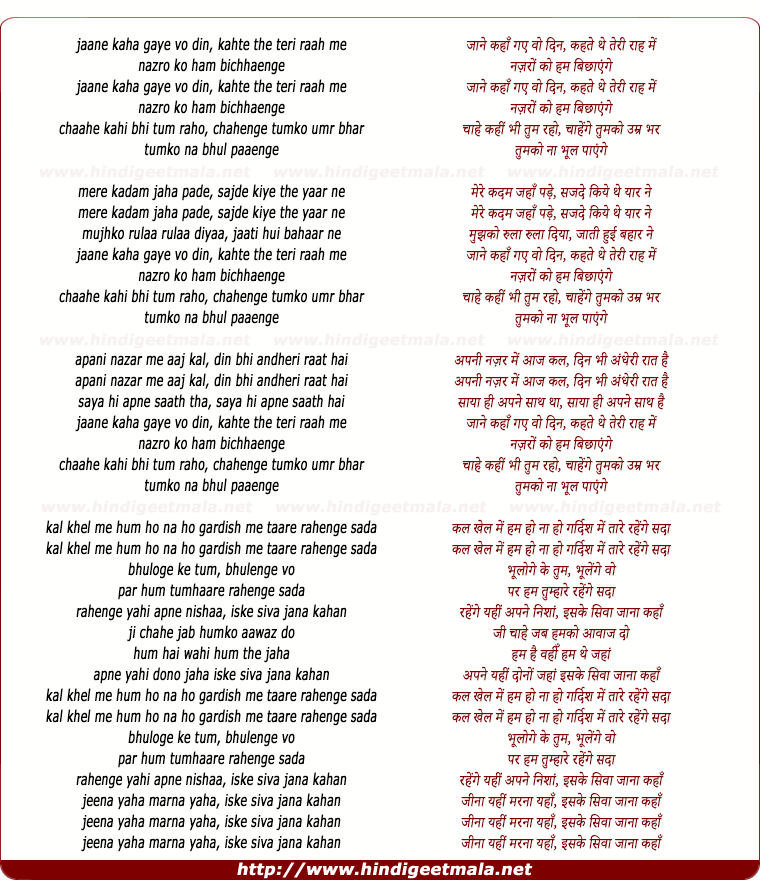 Comments on song "Jane Kahan Gaye Wo Din"
DR. SANJAY KUMAR Sr., MD on Saturday, February 28, 2015
This is the Best Song of Mukesh: Hands Down.
* Jaane Kaha Gaye Woh Din *
The tune is originally heard in R.K. Films' previous production, "Aah", for
the background music by Shankar-Jaikishan in one scene.
It is the epitome of Raj Kapoor's soul expressed through Mukesh's
well-suited voice. We wait for all three segments of "Mera Naam Joker" with
two intermissions, to this final best song of the film. MeraNaam Joker was
the ultimate film of Raj Kapoor's true personality as a comedian combined
with a tragic love character.
Raj Kapoor stated that when Mukesh passed away, there went his voice. Raj
Kapoor stated that when he points to the audience in the gesture asking,
"Have you seen my heart?", he said in his interview that very few people in
this world have had the distiction of having someone truly seeing their
heart. This effected Raj Kapoor in real life very much. Also, when he was
asked which was his favorite of his films, he said, "Mera Naam Joker" and
"Jagte Raho", because they both were like when a Mother has a child among
many who happens to have a disability. He said that "Mera Naam Joker"
didn't do that well in the Box office, just like "Jagte Raho" as well. But
they spoke his personal philosophies. Therefore, these two films were his
favorites.
"Jaane Kaha" is one of my favorite songs which I myself sing often for
functions. A true classic of a Beautiful era of R.K. Films and
Shankar-Jaikishan music.

V.G BHAT SIRSI Canara on Monday, October 19, 2015
All time great musical maestros who composed ever-lasting soulful melodies.
Music that is immortal and will remain etched in our memories forever.
I consider it a huge honour & privilege to have met them and interacted
with them on numerous occasions.. They were very down to earth and greeted
all their fans with a lot of humility and affection. Despite their hectic
schedule comprising meetings with singers, producers, etc they ensured that
well-wishers like me were taken care of. Being an ardent fan, I used to
attend their sessions at Famous Studios, which many a times extended till
late evenings. Shankarji then used to send his personal assistant to see me
off at Mahalaxmi railway station..
Here’s one example of their sheer greatness. ‘Bobby’ which released in 1973
featured the song ‘Na mango sona chandi’ which become a massive hit song at
that time. But this song was composed 2 decades back only by this musical
duo and can be heard in Instrumental while Nargis bathing scene in the
movie ‘Awara’ in 1952
Even the song ‘O basanti Pawan Pagal’ can be heard in Instrumental in the
movie ‘Awara’. Such was their uniqueness and distinctiveness that tunes
were composed way before lyrics were written.﻿

Adi Damania on Wednesday, February 05, 2014
Mera Naam Joker did not do too well in India, and it bankrupted Raj Kapoor
and he had to sell/mortgage his belongings, incl. his RK Studios at
Chembur. Even though Mera Naam Joker was well-made with a great story, it
did not have the Bollywood masala that the common Indian filmgoer craves.
To redeem himself and recover his financial losses Raj Kapoor then made
"Bobby". With a great soundtrack the film was a BIG mega hit in India and
Raj Kapoor paid off all his creditors in full. In the meantime, Mera Naam
Joker ran to full houses, IN RUSSIA! He became a household name there. In
his heart Raj Kapoor felt vindicated about .Joker; that he had not made
a flop picture after all!!!!﻿

Sreepada RAMA NAGESWARA RAO on Wednesday, July 22, 2015
'JANE KAHAN GAYE WOH DIN' . Yes the good golden era songs cannot be
composed again in the present times. REMEMBERING THE LEGENDARY SINGER
MUKESHJI ON HIS BIRTH DAY ON 22ND JULY, I PLAY THIS SONG WHICH I LIKE VERY
MUCH AND FOR EVER. THE VOICE OF MUKESHJI LIVES IN MY HART FOR EVER AND
ECHOS AND HAUNT ME EVERY TIME WHEN I SIT PEACEFULLY. I THINK, SUCH A GREAT
SINGER VOICE LIVES ON THIS EARTH AS LONG AS THIS UNIVERSE EXIST OR EVEN
MORE. I ONCE AGAIN RECALL HIS SONGS ON HIS BIRTH DAY.﻿