Video of this song from youtube
Average Rating : 4.46
Total Vote(s) : 1166
Please rate this song between 1 star and 5 stars (5 stars being the best). Just move your mouse on the stars above and click as per your rating. Your rating will really help us to improve our website. 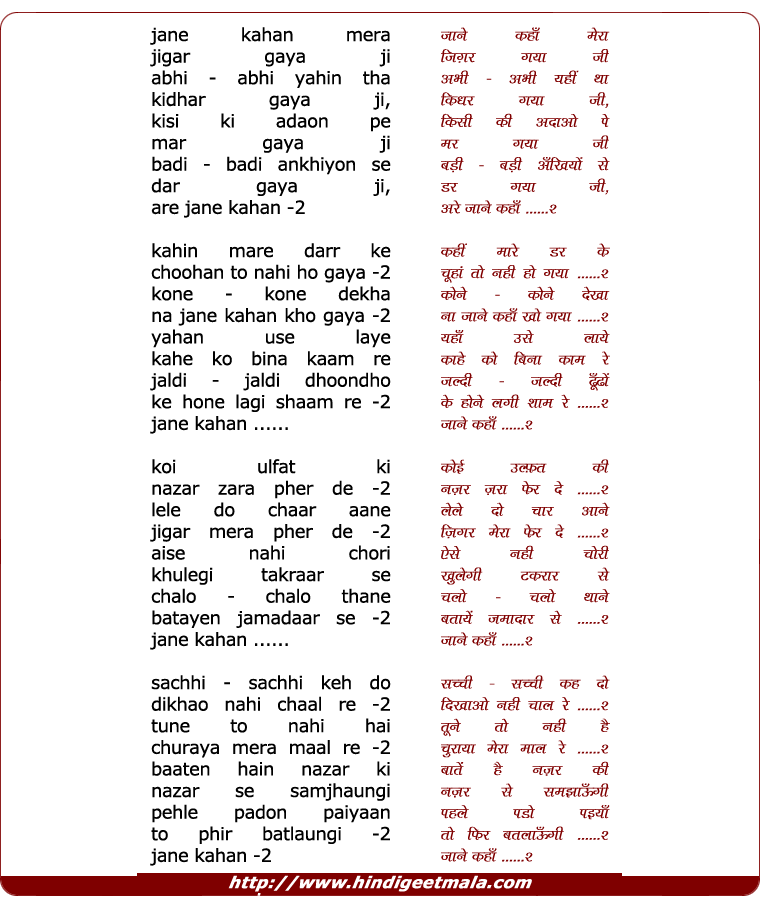 Comments on song "Jane Kahan Mera Jigar Gaya Ji"
orientlover1 on Saturday, May 29, 2010
@SatpalSingh0884 jamadar is actually a short for of persian word "jamiat dar" (Jamiat meaning a large number of people+dar )which was a high ranking army officer in the mughal army equal to today's corps commander ( some 25 thousand horsemen). the british policy was to degrade the local ranks and created the post of jamadar - a lowly rank in the army and in police. similarly subedar ( suba= province + dar ) was the governor of a province but the british allotted this rank to a JCO in the army
orientlover1 on Saturday, December 10, 2011
She is Vinita Bhatt with screen name Yasmin. Song from film Shagun mentioned by you is not picturised on her. That's some other unknown actress. Vinita Bhatt married in Sep. 1955 with a makeup man Jimmy Vining and left movie career. She is reportedly settled in Germany.
MsSVasan on Friday, November 21, 2008
It is truly wonderful 2 read so many lovely comments by such a wonderful
audience who are so homogeniously involved in this amazing Love Affair
w/such a Beloved Evergreen Classic Gem of a Song(Acting,Presence,
Beauty,Charisma,Mischievousness,Wonderful Amazing Lyrics & Meaning),from
the Silver Screen of the great Bombay Talkies of the 40s-60s.Rafis voice
goes like hand n glove for Johnny Walker.The actress whose mini bio I
garnered by reading below comments is so adorable w/her Sweet Dimples.

rekhalalit on Tuesday, June 22, 2010
Super Duper hit song from film "Mr. & Mrs.55" directed & acted by Guru
Dutt. There is always Mohammed Rafi Sahab's, Geeta Dutt's & Shamshad
Begum's voices & Johnny Walker in Guru Dutt's movies. Here Johnny Walker is
with Actress "YASMIN". She is so cute & beautiful . You can see her dimples
on her cheeks. This song is as fresh as in late 1950's. Black & White
movies songs are milestones & unforgetable. These were, are & will be
melodious . from Prince Lalit Bhambhani Atlanta, Georgia (USA)

MsSVasan on Friday, November 21, 2008
What I find really alluring is the amazing lyrics & how well both have
performed. Vinita reminds me of yet another actress who someone called a
real 'Chulbul', "Shyama" & she is in another outstanding song "Dekho Woh
Chand Chupke Chupke Karta Hai Kya Ishare".For some odd reasons,Vinita
reminds me of Shyama even though they are not similar at all. If one
examines closely Vinita does not over act at all yet her
acting(expressions) are so appropriate & just great.A real lovely song
indeed.