Video of this song from youtube
Average Rating : 4.30
Total Vote(s) : 56
Please rate this song between 1 star and 5 stars (5 stars being the best). Just move your mouse on the stars above and click as per your rating. Your rating will really help us to improve our website. 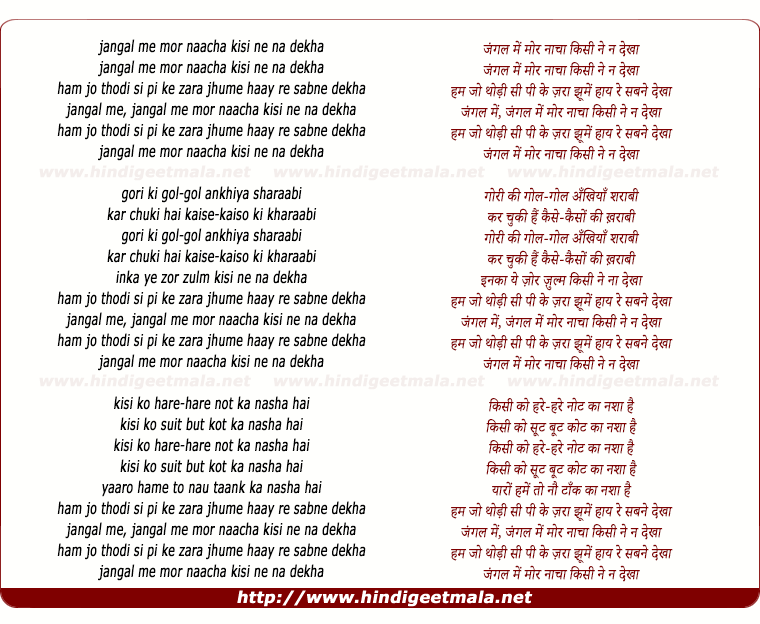 Comments on song "Jangal Me Mor Nacha Kisi Ne Na Dekha"
rekhalalit on Tuesday, June 22, 2010
This song is from film "Madhumati" ( 1957 ). This movie is the Milestone in Indian Film Industry. Melodious music & all super hit songs & great actors in this movie. And above all Mohammed Rafi Sahab is always great . He sung two songs in this film. One is this -- "Jungle mein mor nacha." & another is "Toote hue khwaabon ne.." . Both songs are super duper hit. In this film Lyricist was "Shailendra" & Musician was "Salil Choudhary.

Sholay48 on Monday, February 14, 2011
@rekhalalit Hi friend, I agree. Madhumati remains the best for me. The 2 DK films that stand high for me are this one and Paigham. Note that both have Vijayanthimala as well. Please also note the 2 different styles that Rafi uses to sing these 2 songs, one for a comedian and one for DK. The voices fit both actors appropriately. Rafi turns into JW when he sings for him. They match each other so much that if Rafi was acting in the film, you would have thought that JW was the playback singer.
Vinay Hegde on Friday, August 29, 2014

What a delightful song! Often overlooked among the more popular songs from
Madhumati (and there were plenty), this gem of a song shows the versatility
of Salil Chaudhari. And both Johnny Walker and Rafi were teetotallers in
real life.﻿
﻿

It is talking about how the rest of the world ignores the most egregious offences of some people and yet how when I commit the slightest infarction, I become notorious. That is exactly what this song is talking about. Its a highly sacrastic song if you think about it