Video of this song from youtube
Average Rating : 4.44
Total Vote(s) : 1195
Please rate this song between 1 star and 5 stars (5 stars being the best). Just move your mouse on the stars above and click as per your rating. Your rating will really help us to improve our website. 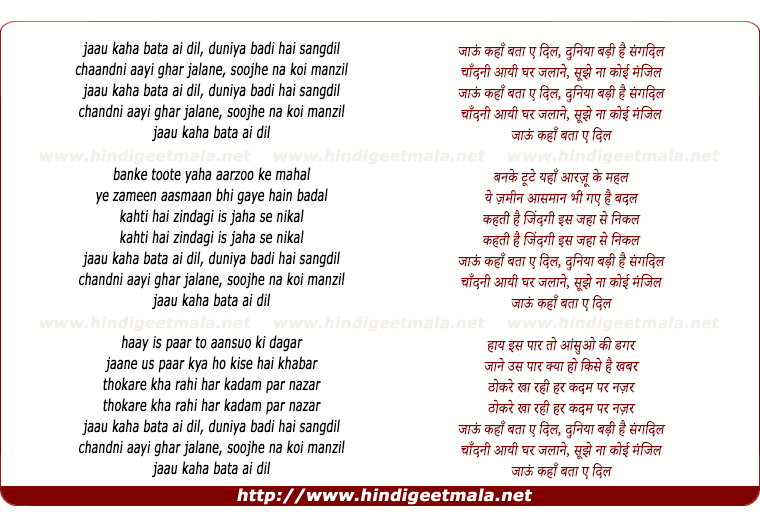 Comments on song "Jaoon Kahan Bata Aye Dil"
Ajay Bhuta on Monday, December 29, 2014
Class N Superb song Mukesh n Very good Lyric of song n One of my Friend
like this song very much n as I am group singer he has suggested many times
for singing this song now he is retired from job where I am working n I
surprised by Rehemaji in this song as I have watch this song first time n
very good video thanksRajshri﻿

Raman Beri on Monday, March 23, 2015
Dil KO sakun Dene Wala song with fine performances like Balraj Sahni,
Nanda,Rahman,and Shyama. I am sorry to write none if them is alive. The
movie is Choti Bahan, an other ever green song of the movie is Bhaia more
raakhi ke bandhan KO nibhana still run on radio and Tv on raakhi.﻿

Vinay Hegde on Friday, July 17, 2015
Rehman was one of the most dignified and impressive character actors in
Hindi cinema. It is such a pleasure to watch this lovely song picturised on
him﻿

Prakash Rao on Friday, July 24, 2015
superb ever living songs are of Mukeshji and real lovers will enjoy always
irrespective of their age. mvprakashrao, secunderabad, telangana state.﻿