Video of this song from youtube
Average Rating : 4.32
Total Vote(s) : 1574
Please rate this song between 1 star and 5 stars (5 stars being the best). Just move your mouse on the stars above and click as per your rating. Your rating will really help us to improve our website. 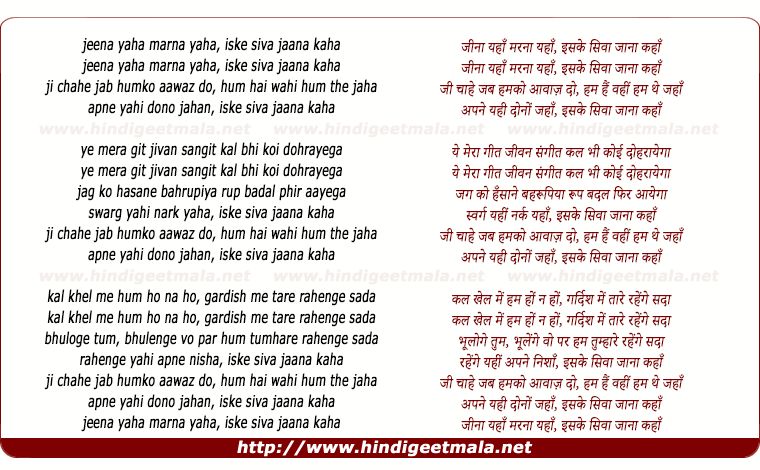 Comments on song "Jeena Yaha Marna Yaha Iske Siva Jana Kaha"
Thej Wagle on Tuesday, July 17, 2012
Dear liverpoolisbest1001, Request you to consider 1 less among the five you wrote, that's RAJ KAPOOR. The day you know what he is, you will be bewildered & wud hate to see his face/movies (except movies where SJ gave music).

When parents teach their children about Hippocrates, they shud include the names of RAJ KAPOOR & RANDHIR KAPOOR without fail.

If Makkaree, Jaalsaazi, Back biting was to be learnt, the industry people wud approach the father-son pair as above. They were masters in that.

I know a lots of Bollywood history from 1948-2000. If I had got 1 opportunity to sit with you & open the PANDORA box of RK's life, then you wud just spit on his face.

Rk ws made by his team & the same team ke kept dismantaling on his ego without they doing anything wrong.They were/are still wonderstruck & so are historians.

RK was made by SJ music.without it he was 0. Can u tell 1 gud thing of his personal life.

prab dhaliwal on Thursday, April 30, 2015
Indian film industry used to be so golden, what just happened to it. Great
singrs, composers, poets and actors, compare to today, it seems like it was
from a different planet. Perhaps the people were different at that time and
their conciousness had a taste of purity of art. You can call whatever is
made today "a movie", but compare to the classics, these are just 3 hour
long shampoo commercials.﻿

Nasim Khan on Friday, July 20, 2012
Raj Kapoor is great person .i am speech less because for RAJ
KAPOOR i don't have like him words..Raj Kapoor is really good
teacher for human and for life..i love him and when i am watching his
movies trust me i am crying,i don't now why but its true i am crying
.he is amazing...i love him.