Video of this song from youtube
Average Rating : 4.30
Total Vote(s) : 40
Please rate this song between 1 star and 5 stars (5 stars being the best). Just move your mouse on the stars above and click as per your rating. Your rating will really help us to improve our website. 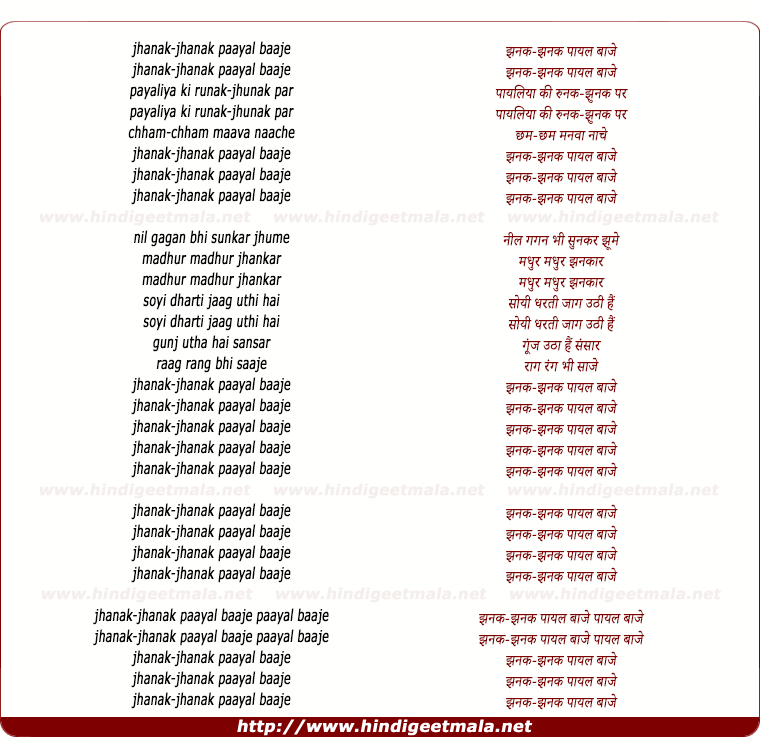 Comments on song "Jhanak Jhanak Paayal Baaje"
Dedeify on Saturday, May 09, 2009
i love clasical dance. i am a male kathak dancer can anyone tell me about more songs like this plz plz plz
Bharat Gul on Tuesday, September 02, 2014
A superb classical performance. And a classy role by each dancer and
singer. Another jewel of a film from V. Shantaram, one of the towering men
in Indian cinema.
On the internet,one can see some of Sandhya Shantaram's recent photos
taken at various public events-- always in a white blouse and sari,
probably as a mark of traditional-style respect for her late husband.
Thanks, COS.﻿

ved prakash on Sunday, April 18, 2010
exquisite kathak-dance and accompanying short song beautifully sung by Lata
and Mannadey--particularly Lata in her most beautiful voice with tonal
modulations. melodious meend, murkis typical of Lata in her young days,
when her voice was flexible and most melidious.

Reincarnation on Thursday, July 23, 2015
what a splendid dance/song.gopi krishan was an amazing dancer and
sandhya an
excellent one, too. a truly immortal film. never gets old...have watched it
countless times and will keep on watching. thanks for sharing...﻿

akarshik on Tuesday, October 28, 2008
what a nice Kathak dance performed by Radha & shayam. God bless you my
friend for fantastic upload.