Video of this song from youtube
Average Rating : 4.33
Total Vote(s) : 36
Please rate this song between 1 star and 5 stars (5 stars being the best). Just move your mouse on the stars above and click as per your rating. Your rating will really help us to improve our website. 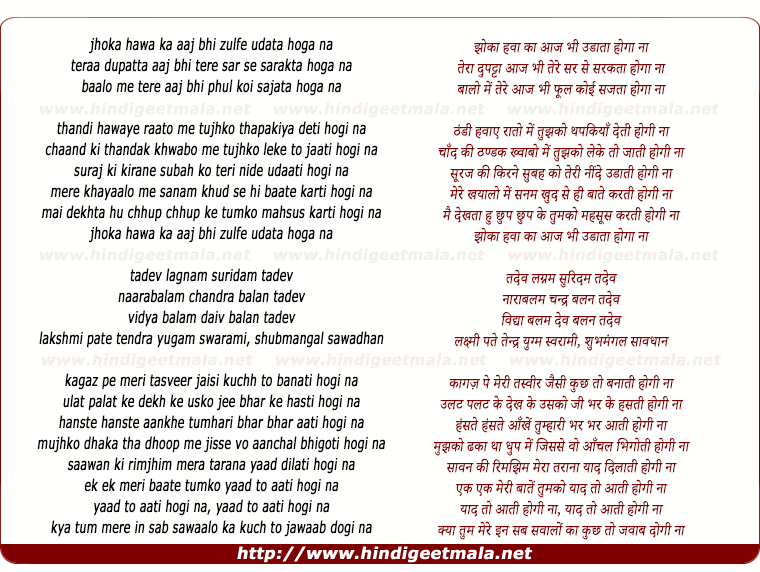 Comments on song "Jhonka Hava Ka Aaj Bhi Zulfein Udaata Hoga Na"
Turkishhoney7 on Wednesday, June 05, 2013
and what is with indian husbands? the most treat their wifes like animals
and why because they are obsequiously, i think in a marrige both parts
should be equal i don't like the way the women see their husbands. a man is
also just a human and not a god. i understand that you as man like this but
i think if you love somone than you should love her/his personality her/his
kind heart and not the things the person do for you or sacrifice for you.

checkmate23ify on Monday, July 01, 2013
Aishwarya's character chooses Ajay because she realizes that no one can
love her as much as he does. Thats what the movie is also trying to show.
He loves her so much that he is willing to sacrifice his happiness for his
wife's. There is no need to bring up an issue about being an Indian or not.
Any sensible and loving woman would do that...Indian or not!!

Pallavereddy Reddy on Tuesday, February 12, 2013
THIS SONG HIS FOR MY CUTE INNOCENT FRIEND IN MY M.S DAYS PRANAV REDDY
MURTHY MY M.S DAYS ,CLASSMATE MY TRUE REAL BEST FRIEND WE BOTH HAD GOOD
TIMES TALKING TO EACT OTHER ,STUDING IN M.S IN NYIT COLLEGE , HE WAS THE
BEST PERSON I HAD EVER MET MY TRUE FRIEND IN MY LIFE

King Chen on Sunday, September 13, 2015
well the whole movie had mostly salman khan and ashwariya rai but ajay
devgn just stole the show..without his character the film is shi* and i'm
just being honest﻿

sunsetinsahara on Thursday, August 18, 2011
really great song...just wondering at 2:36 why doesn't she just hold the
container in her injured hand and use her good hand to put the sindoor in
the hair?! lol