Video of this song from youtube
Average Rating : 4.50
Total Vote(s) : 24
Please rate this song between 1 star and 5 stars (5 stars being the best). Just move your mouse on the stars above and click as per your rating. Your rating will really help us to improve our website. 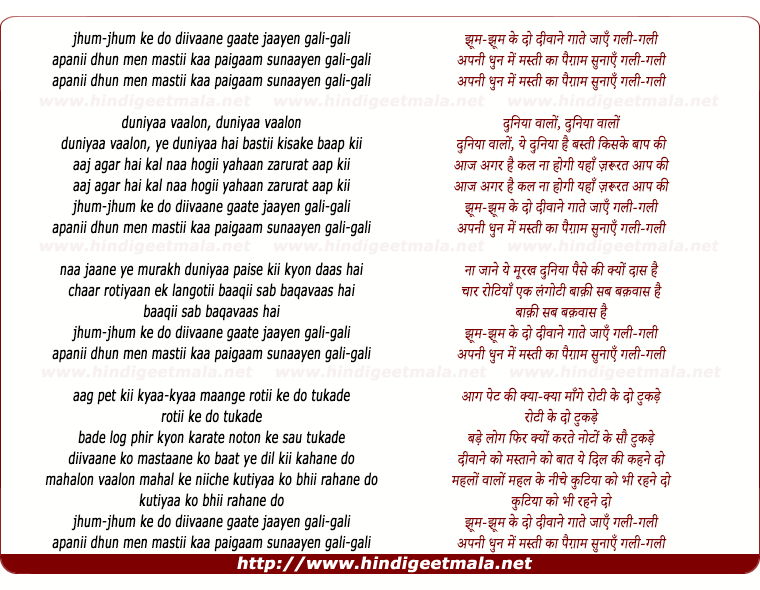 Comments on song "Jhoom Jhoom Ke Do Diwane Gate Jaye Gali Gali"
V. Siddhartha on Tuesday, August 24, 2010
@chamogaa . You know, if you could see the clip, the kid in it is wearing
his cap sideways and backwards, the way it has become fashionable with boys
wearing baseball caps recently. The film was made in 1955 ! So this kid
pioneered the "fashion" !!

V. Siddhartha on Tuesday, August 24, 2010
Thanks, Ajay. Yes, this is the song I had in mind. I stand corrected :The
female part is by the singer you identified , not Asha Bhonsle as I
faultily remembered. There is also a great MR bhajan in this film, Mat
Bhool Arey Insaan.

Ajay Yuvraj on Tuesday, August 24, 2010
@chamogaa Yes Vipan jee i have seen the Video on Ajit jees channel, i also
have a VCD but its a lot easier to tune in to YT.

tintunbirha on Thursday, August 27, 2015
I have heard both uploads by ay and I find this one to be slower and better
paced.﻿