Video of this song from youtube
Average Rating : 4.15
Total Vote(s) : 66
Please rate this song between 1 star and 5 stars (5 stars being the best). Just move your mouse on the stars above and click as per your rating. Your rating will really help us to improve our website. 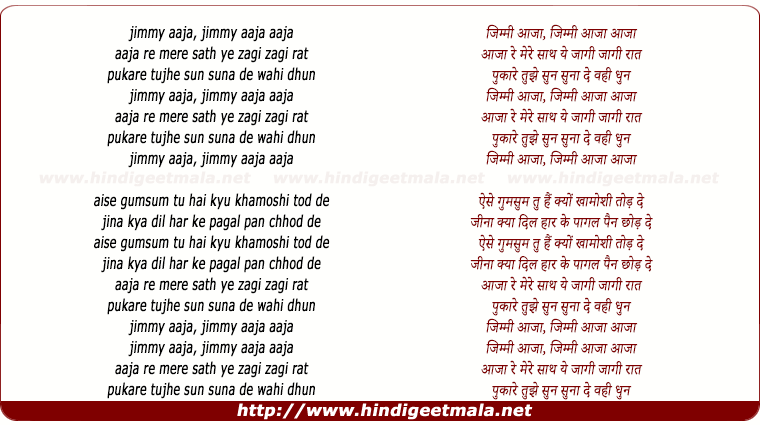 Comments on song "Jimmy Aaja"
tranish76 on Monday, October 03, 2011
mithun da rocks...back 2 childhood days...no1 carries emotions through dance as mithunda...effortless
Pawan Kumar on Saturday, September 05, 2015
*****************The story behind this awesome song ******************
A poor street kid jimmy (Mithun Chakraborty) while performing the song
inside a rich person (Oberoi) house was insulted and got an accusation of
false charges of theft and got his widowed mother jailed. Later he became a
star after turning to Mumbai, India. and get name and fame. In revenge of
his singer son's dwindling career Oberoi tried to attempt murder Jimmy but
accidentally kill his mother through Electrocution by guitar.Later
jimmy develops phobia to guitars and left his
musical career in memory of his mom.
So this music is to call jimmy. "Jimmy come"."Jimmy come". in Hindi
language "Jimmy Aaja"... "Jimmy Aaja"..

As an Indian and younger generation guy, I never realized this movie and
song made so nostalgic Not only to Russians, But Uzbeks, Tajiks, Greeks,
Kazakhs, some Caucasian countries like Georgia and Armenia also.﻿

Afag Hajizada on Tuesday, February 03, 2015
I am Azerbaijanian but I remember this song and the movie from my
childhood. Even mom says we were child when this film was so popular. :) I
can say the same thing for the songs like I'm a disco dancer, Awara, Han Ji
Han Maine Sharaab and much more old movie songs. Mum loves old indian
movies so much and always says it was the golden era of indian movies
because they were full of love, emotions and good acting. She doesn't
actually like today's indian films. ﻿

globalcitizenn on Sunday, September 09, 2012
He was about to perform on stage using an electric guitar that was rigged to electricute him. His mother figured out the plot and took the "hit" for him saving his life, he's had stage fright ever since. The show is sold out and the audience is getting restless, his girlfriend starts singing to distract them while she is coaxing jimmy to sing. If you see the next song that follows this"yaad aa raha hai tera pyar" he starts to sing in memory of his mother.
View all 195 comments related to song Jimmy Aaja
Popular Links on HindiGeetMala