Video of this song from youtube
Average Rating : 3.46
Total Vote(s) : 247
Please rate this song between 1 star and 5 stars (5 stars being the best). Just move your mouse on the stars above and click as per your rating. Your rating will really help us to improve our website. 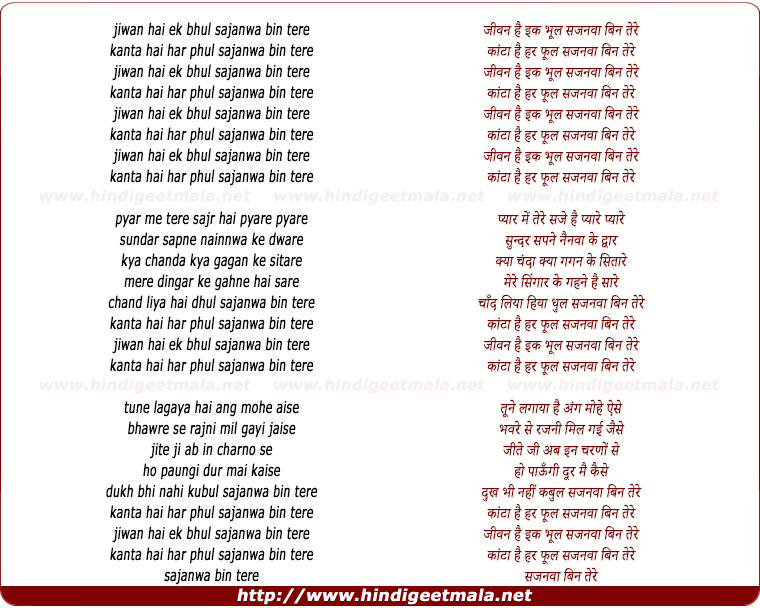 Comments on song "Jivan Hai Ek Bhool Sajanwa Bin Tere"
Milahi1935 on Friday, April 29, 2011
Suman has done a great job in making this medium tune sound great. She is as good if not better than the other singers of her time, but her talents were not appreciated by the mediocre music composers of her era. She got only 740 songs over 20 plus years that she sang. She should have got ten thousand songs, as her range was better and voice as sweet as Lata's.
TheDeepakp on Saturday, October 17, 2015
Film cast: Anil Dhawan, Rehana Sultan, Shatrughan Sinha, Nadira, Manmohan
Krishna, Laxmi Chhaya, Asit Sen, Johny Whiskey
Singer: Lata Mangeshkar, Mukesh, Suman Kalyanpur
Lyricist: Naqsh Lyallpuri
Music Director: Sapan Jagmohan
Film Director: B R Ishara
Film Producer: I M Kunnu﻿

Narender Soni on Monday, June 22, 2015
Music is by Music Directors Pair of Sapan Ji Jagmohan Ji.
This film "Chetana" has only two songs. The other is by Mukesh Sahab --
"Main to har mod par tujhko doonga sadaa".﻿

virjibhai parmar on Saturday, August 16, 2014
wow ! what a song of yester years !! Sukh bhi nahin kabool, sajanva bin
tere !! Hats off to the song and the singer.. 〠 ℒ♡ⓥℯ〠﻿