Average Rating : 4.32
Total Vote(s) : 188
Please rate this song between 1 star and 5 stars (5 stars being the best). Just move your mouse on the stars above and click as per your rating. Your rating will really help us to improve our website. 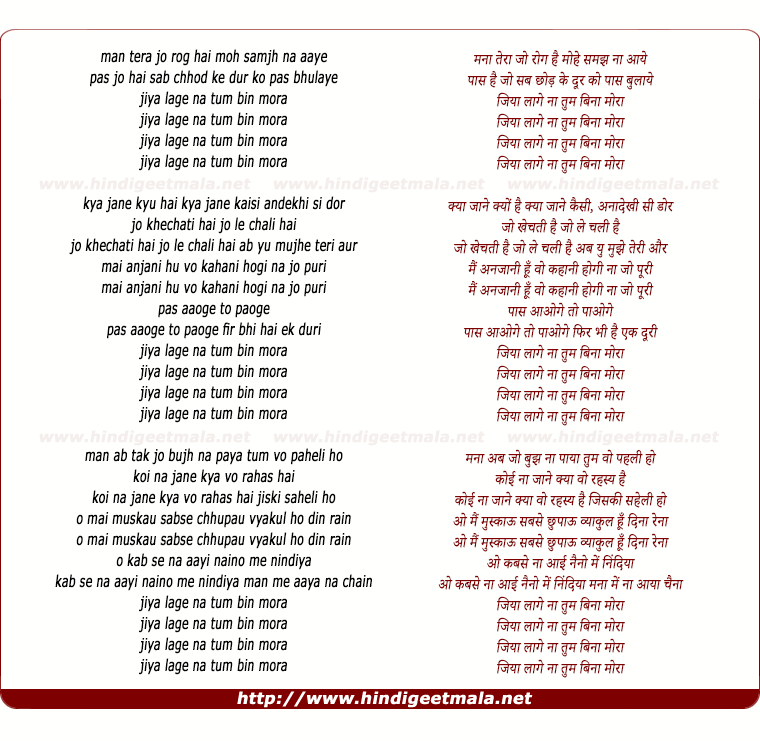 Comments on song "Jiya Lage Na Tum Bina Mora"
Lokkhim on Monday, December 10, 2012
This semi classical song makes me to feel somethings very special in me. Superb music,sona n rabidra re spectacutar,i cnt stop listening dis song
jqur32 on Sunday, December 02, 2012
beautiful movie, excellent story, best songs, AND the best acting of 2012 (amir/kareena/rani) = talaash
Ron Yadav on Tuesday, December 04, 2012
allah kasam, bahot dino baad aisa movie dekha...mazaa aaya. this song is simply superb
Awais Javaid on Friday, December 21, 2012
let me rephrase you something dear,without any offense...i myself am a very strict movie rating person,i see very tiny details and when i am impressed by some movie,then i rate it good.on imdb i think i have rated only 2-3 movies to 9 rating(thats another long debate that imdb gives false ratings)
my point is,when you see an indian film,for a moment put Hollywood behind and see the effort of a local director even if it is a copied concept,see it with a view that might be he added something.

QFilmz on Thursday, January 03, 2013
i understand what your saying but you must have misunderstood me. ,
bollywood has never been "inspired" , they look up hollywood films and
re-create each scene exactly , assuming nobody would find out. this is NOT
inspiration , original doesn't mean better , but this has absouluty nothing
to do with inspiration because bollywood directors use that word to cover
the fact that they are simply uncreative , unimaginative , limited
directors looking for something to re-create