Video of this song from youtube
Average Rating : 4.00
Total Vote(s) : 8
Please rate this song between 1 star and 5 stars (5 stars being the best). Just move your mouse on the stars above and click as per your rating. Your rating will really help us to improve our website. 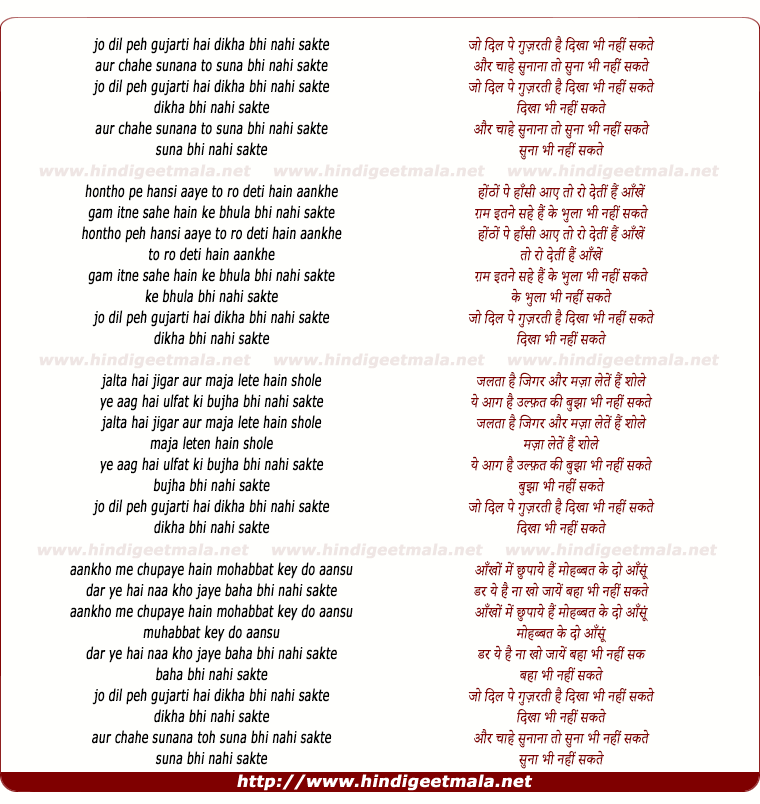 Comments on song "Jo Dil Pe Gujarati Hai"
V. Siddhartha on Thursday, February 26, 2009
I may be wrong, but I believe it is Jayshree herself who is singing here.
She and Nutan were among the actresses who sang a few songs on themselves,
as( equally rarely) did Dilip Kumar and Askok Kumar on the male side. Of
course, in reverse, there were singers who acted, though few in stellar
ways. Recall, say, KLS, Kanan Devi, Mukesh, Talat Mehmood, and Kishore
Kumar. Even Lataji acted early on in some forgotten movies. In
singing,Jayshree is not bad at all. Thanks, Suhanee.

Riaz Ali on Monday, December 05, 2011
The best ever classic of Jayshree. Andaz kuch aisa hi hai jo dil ko jaroor
lagti hai. The song she herself recorded and picturised upon her thats why
the expression is real. I have heard her few songs but this one is so
touching. Thanks

V. Siddhartha on Thursday, February 26, 2009
Oops, I forgot the beloved Suraiya. Was she an actress who sang or a singer
who acted? However one defines her identity, she was precious.