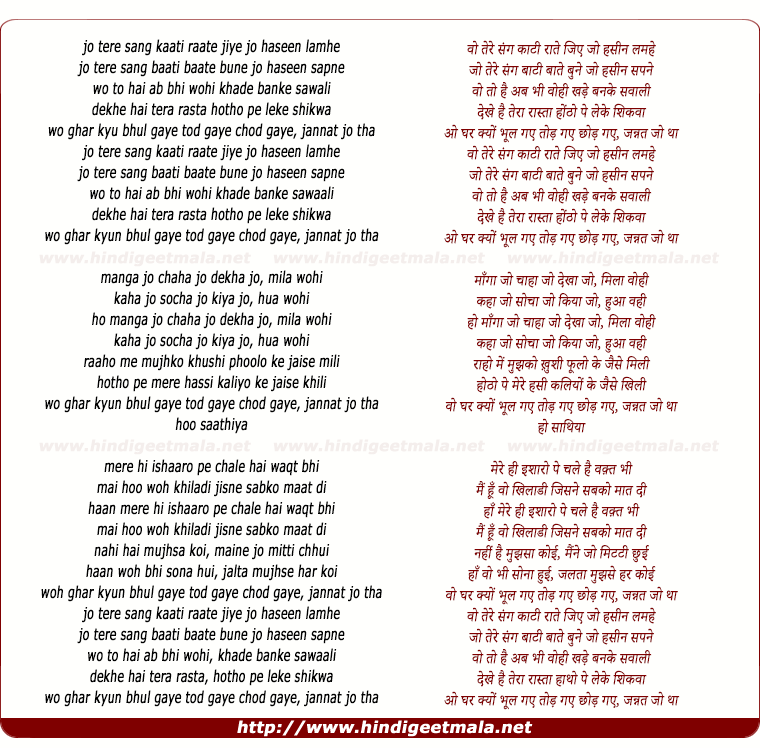 Comments on song "Jo Tere Sang Kati Rate"
MsIdora on Tuesday, April 17, 2012
some friend from indian told me to find this song lastnight.then i just
listen it from lastnight and i replay this song till now...i still listen
this song right now too...will be crazy FANS of this song..hehehe..i
was fall in love with this song...very nice song..i hope can watch the
movie too...look like the movie is very great..i should watch it...should
be..

Riju Simple Boy on Thursday, April 05, 2012
I am a bengali...This song is good but i dont feel this song as an awsome one only for this copycat Jeet Ganguly..coz in bengali he has a same song like this..so the people who r not bengali is enjoying this song greatly..but i could not...thus i am very much jealous :P
Subhayu Bhattacharya on Saturday, May 26, 2012
This song is remake of Bengali song 'khujechi toke raat birete'. This song is sung by Mustafa Zaid. The Bengali song was sung by Jeet Ganguly. He is the music director in both the Bengali & the Hindi movie. But this song seems much better than the original.
missadri7 on Thursday, February 23, 2012
Fantastic video, fantastic song, fantastic movie... Well done Jeet,
Mustafa, Sony for the music... Well done Kunal, Mia and Manish on the
visuals from the movie Blood Money And well done Vishal for giving us such
a great movie.

sanamo86 on Saturday, April 07, 2012
hmm i guess its a matter of opinion, I think Kunal has this boyish
innoncence, u know like newly married, small town boy in a big city look,
which is needed for this film, whereas Emraan kinda has lost his innoncence