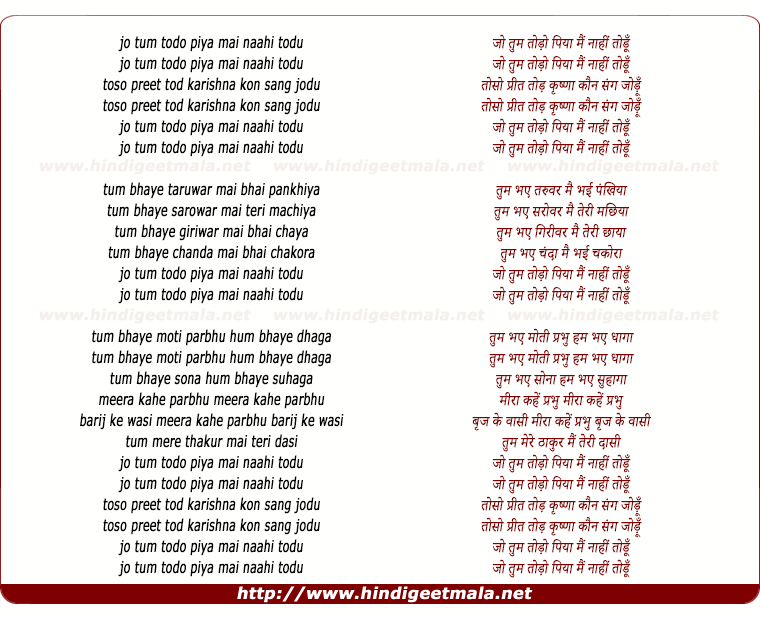 Comments on song "Jo Tum Todo Piya"
RituPM :) FEELThePurityPeace&DepthINMusicINYourShr on Wednesday, October 15, 2008
Thanks a ton for uploading this!! :) This has been one of my all time
favorite Meera Bhajans since my Delhi days years back as a college student.
STILL love it just the same. LOVE singing these. Thanks to YOUTUBE and
folks who cherish music this awesome...am just sooo delighted. Life is
worth living for beautiful music itself... :) add humor, nature and awesome
sweet caring people you choose to be with - what more could one want? :)
Best to you. Always. Ritu from California.

V. Siddhartha on Wednesday, December 17, 2008
A masterpiece in the genre of bhajans. There are several ethereal ones,
including Aeri Mein To Prem Diwani, Jago Mohan Pyare Jago,Prabhu Tero Nam,
and Jyoti Kalash Chhalke, sung by Lataji ,but this one by Vani Jairam
brings the spiritual message of the bhakti tradition to new heights of
piety,or perhaps I should say, new DEPTHS of piety since such feelings come
from the core of one's soul. Many thanks for uploading this uplifting hymn,
vidyakarella.

vedicger108 on Thursday, March 05, 2009
Yes. The song featured on this youtube page is by Vani Jairam composed by
Ravi Shankar. This is the song 'jo tum todo PIYA, main nahi todun" by Mira
Bai. The one cgdakshata was referring to was a song written by poet Raidasa
with the words "jo tum toro RAM, main nahi torun." Different lyrics within
the song. Lakshmi Shanar sang this song twice. Once in the album version in
1979 and the other in a concert version. :-)

RituPM :) FEELThePurityPeace&DepthINMusicINYourShr on Monday, November 23, 2009
BEAUTIFUL Example of Scintillating Sitar Composition in this!! :) It
absolutely drenches the listeners' audio senses in sheer musical euphoria!
:) Have always LOVED this Meera bhajan, sung very beautifully by Vani
Jayaram. :) Thanks for uploading Vani Jayaram Meera bhajans. Look forward
to MORE! :) The sitar rendition sure is "out of this world" here. :) LOVE
it. Best Always, Ritu, California, Nov' 22, 09.

nandu1f on Friday, February 19, 2010
Meera's bhajan's broke the dam for me and I started appreciating bhakti
ras. In this one Vani Jairam is really superb as was Lata in the other one
from "Jhanak Jhanak Payal..." movie. For some reason, Hema Malini comes out
so flat in this one in her acting. Just does not convey Meerabai's anguish
and ethos.