Average Rating : 4.83
Total Vote(s) : 24
Please rate this song between 1 star and 5 stars (5 stars being the best). Just move your mouse on the stars above and click as per your rating. Your rating will really help us to improve our website. 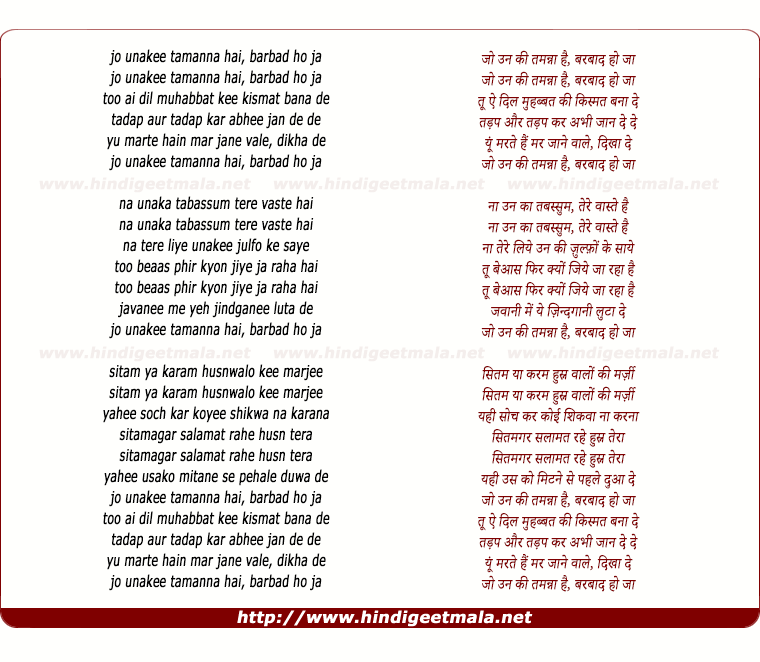 ALL THE SINGERS ARE EXCELLENT BUT MOST VERSATILE PICK CERTAINLY ARE
MOHAMMED RAFI, KISHORE AND SP BALASUBRMNYM.
ANY DOUBTS????????﻿

Sholay48 on Monday, October 17, 2011
@ramaraksha01 As to who is one's best singer depends a lot on one's
choices, likes and dislikes and to a large extent one's own prejudices. I
can read that Rafi does not stand a chance in your book. I judge a singer
on the impact he has on the singing world and in my own life. I grew up in
Rafi's era. He needs no introduction. It seems that Manna D fits your
choice of your best singer. I have to respect that. I can see your
satisfaction when you describe that "Poor Rafi's voice got drowned out"

Sholay48 on Monday, October 17, 2011
@ramaraksha01 And if I may add. I cannot see where his voice got drowned
out. Your statement is unsubstantiated. I do not know how much you are in
touch with his later songs, or even with his songs. He has sang hundreds of
songs with all the greatest musicians in Indian cinema. Few examples are
SJ, Naushad, both the Burmans, Madan Mohan, L&P, Ravi, Roshan, OPN, Usha K
etc. He has thousands of hits. SJ's music was loud and I cannot see any
problems he had. He even sang loud ones with RD Burman.

ramaraksha01 on Tuesday, October 18, 2011
@Sholay48 Actually Rafi IS my favorite singer, Mukesh a close second. But
most music pundits agree that when it comes to sheer classical singing,
Manna Dey is the best. Mukesh, of course, had no training whatsover, he
just had a good voice Rafi's voice is very good for soft songs, music that
stayed in the background as most of the songs in the 50's & 60's did, but
in the 70's the music got steadily louder, sad to say Listen to the songs
of the 70's like say the Bachann starrer - Parvarish

Sholay48 on Friday, September 23, 2011
@joshuadiesel Hi friend. We cannot compare anyone with Rafi saab. He is the
sun. Without him you have darkness all over. Yes, you can then look out for
the moon. But even the poor moon depends on the sun to project light onto
us. You are then reduced to man made light. Rafi was not an ordinary
singer. Not even him knew exactly how good he was. And as time goes, we
come to realize his greatness. Its only when you are in a place where there
is no sun that you really recognise its value.