Video of this song from youtube
Average Rating : 4.22
Total Vote(s) : 18
Please rate this song between 1 star and 5 stars (5 stars being the best). Just move your mouse on the stars above and click as per your rating. Your rating will really help us to improve our website. 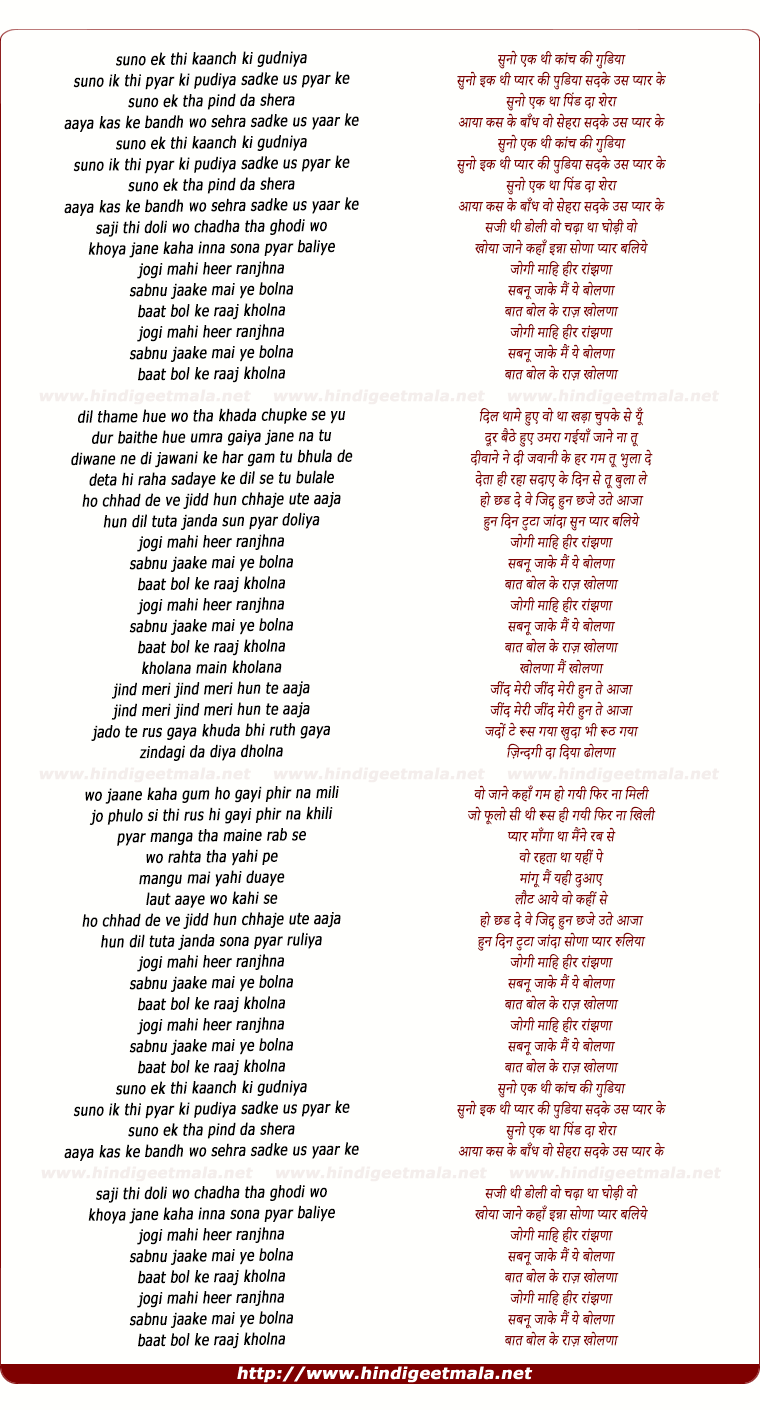 Comments on song "Jogi Maahi Heer Raanjhana"
skc2345678 on Wednesday, July 06, 2011
@superindowan: There are many Indonesians coming and working in India and
vice versa, which is always welcome. Don't forget brothers We all are
Asians, and culture and traditions actually remains in the protected hands
of we Asians, unlike materialistic west. Even i love Indonesian rock band
and some Indian songs are now a days are inspired by them too. After
marriage my sister and brother in law are now going to settle in Jakarta.
Indonesians are friendly people.Indonesia+India=Friends 4ever.

skc2345678 on Wednesday, July 06, 2011
@superindowan: Hello my dear brother. I appreciate the fact you love Indian
culture. Even We Indians love other countries culture too and wants to
learn and appreciate them too. Indonesia and India have great civilization
and culture. You will be surprised to to one of the province in Eastern
India (Odisha) had more than 3000 year old trade and friendship with
Indonesia. Even we celebrate Bali (after indonesia province), we celebrate
Bali Jatra (Fair) in India. We love our Indonesians friends.

AksheeShadow on Tuesday, July 21, 2009
Well prithvi raj kapoor had talent but u didnt get my point. Its not about
talent do u think the guy Sarvar ahuja who won Zee cine star ki khoj has
less talent and PR than these guys ? But the point is the star kids can
afford to do mistakes coz irrespective of their failures they r still
casted in the movies due to family status or contacts or their own family
produces them. Do u think kareena would have been casted in JP dutta;s film
as a debutant? We have a lot of talent around/

AksheeShadow on Tuesday, June 09, 2009
yeah becoz noone can else can afford to have 7-8 flops before the public
gets usd to them and accepts them due to lack of funds and godfathers. Same
thing happened with every star kid and thats why they r around but some
talented people faint away coz noone is gonna cast them I am not sure if it
is something to be proud of or be ashames of that we have sifarish in
entertainment too. :)