Video of this song from youtube
Average Rating : 4.95
Total Vote(s) : 20
Please rate this song between 1 star and 5 stars (5 stars being the best). Just move your mouse on the stars above and click as per your rating. Your rating will really help us to improve our website. 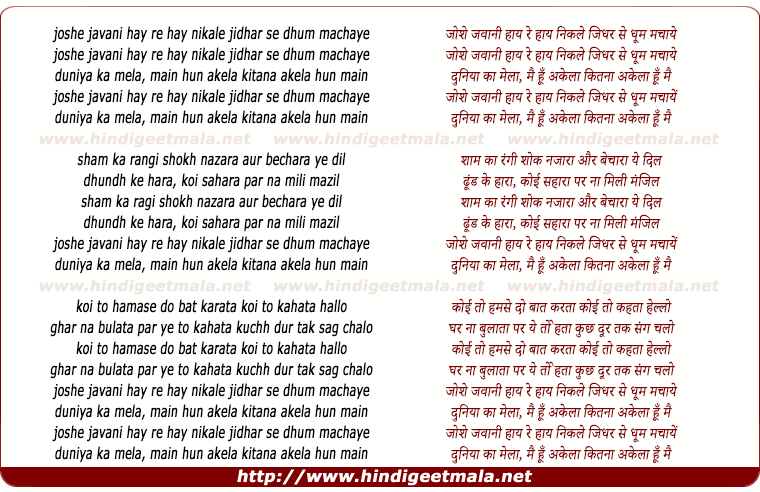 Comments on song "Josh Javaani Haay Re Haay"
Ratilal Shah on Wednesday, January 16, 2013
Another Jewel from SJ- 45 years old composition looks so fresh even
today.The use of various instruments and its editing throught the song is
superb.This specialisation of SJ was seen in most of his songs.After SJ and
to some extent with RD intelligence use of instruments is missing even to
day. R A Shah R A Shah

Ratilal Shah on Wednesday, January 16, 2013
I am fully agree with your view.RK was never over and above SJ.It is true
that raj knowledge in music was great which helps SJ to some extent but you
cant deny the original creativity of SJ. R A Shah

shankerjai on Wednesday, October 17, 2012
3. It were SJ who were loyal and on the zenith of their creativity who made
their stamp on each and every song, Be it was for RK, SK, Rajendra Kumar,
Dev Anand or Dilip Kumar. Listen to music of Raat aur Din, was there any RK
behind that music ? SJ did justice to their association and love with
Nargis ji and the music of this film was not less soulful than that of any
of RK banner's films. So please never do injustice to SJ by saying what
others say. it hurts. Judge their music yourself please.

shankerjai on Wednesday, October 17, 2012
2. It doesn't mean that that RK too was instrumental in the music of Around
the World. He just attended the recordings and not the music composing
proceedings.at all. SJ were highly paid music director duo not for RK, but
for their dedication, devotion, hard labour and capability of giving hit
albums. I may give example of Henna, Dharam-Karam, Biwi-O-Biwi, which were
production of RK but where was the magic touch of RK in these films?? What
happened to his credibility to give RK stamp of music