Average Rating : 4.23
Total Vote(s) : 152
Please rate this song between 1 star and 5 stars (5 stars being the best). Just move your mouse on the stars above and click as per your rating. Your rating will really help us to improve our website. 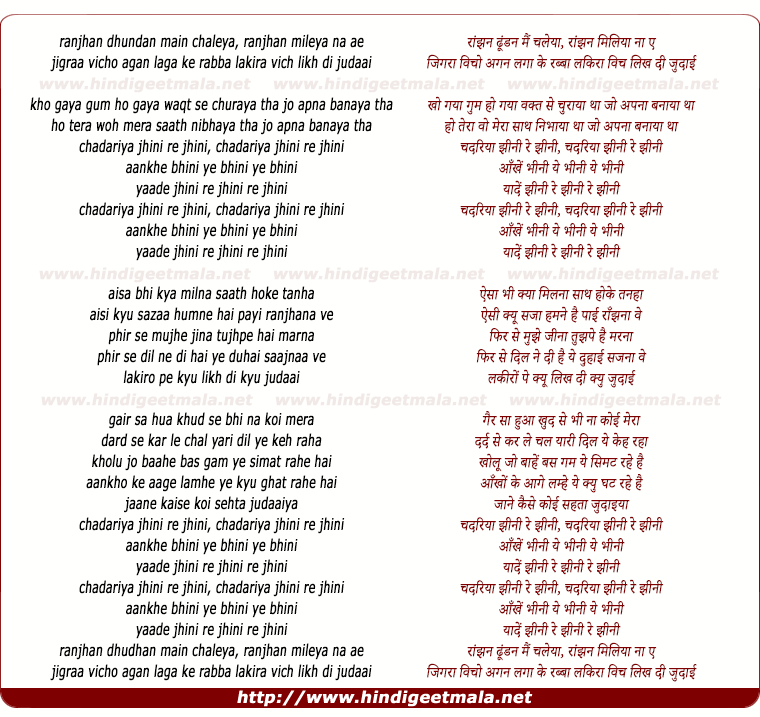 The phrase ‘Chadarya Jheeni re Jheeni’ means ‘the sheet (Body) is a
delicate, transparent sheet’. The saint Kabir says ,“ This life is like a
very thin transparent shawl”.
While the song uses only this single phrase. If you will look at the whole
poem, it starts with a message like this
kabīrā jab ham paidā hue
jaga hańsey ham roye
aisī karanī kar chalo
ham hańse jaga roye
chadariyā jhinī re jhinī
(Kabir, when we are born, the world laughs while we cry, one should do such
deeds that when we leave, the world shall cry while we shall laugh- This
life is like a very thin transparent shawl ).
And goes like this
chādara oḍha shańka math kariyo
yeh do dina tumko dinhī
(Do not have doubts or fears while wearing this chadar (sheet). It is only
given to you for two days and it is temporary too.)

ThatTechGuy23 on Thursday, February 05, 2015
I've thought about this. Siddharth Malhotra, wasn't very matured as an
actor when he made Ek Villain. He was actually less than Varun. I think
Varun is in the top 5 best actors working in Bollywood today. He is
charismatic, charming, and can pull off an emotional performance (ending of
Humpty Sharma is a good example). Siddharth only had SOTY (which he was
passable in), and Hasse Toh Phasse (which I thought nothing worked in).
Varun can, and will pull off this role perfectly, and I am so excited for
this movie.﻿

guru gill on Wednesday, February 04, 2015
starting and ending of the song.. both give a soul to the song..the way u
sing.. both of you.. arijit *duaa*..no words. and rekha *tere ishq mein..*
*mehrooni* and now this..ending of the song...last lines " jigraa vich
~agan lgake.rabba.lakeera vich likh di judaai... the affect u give to these
lines..the words *agan lgake* u always done this in ur songs...u both made
the song more alive...immortal..bless u both..the whole team.. sachin jigar
and most importantly dinesh & Priya for lyrics :) ﻿

Vidal Balkaran on Tuesday, February 03, 2015
People need to stop judging the movie before it is even released. Shahid
Kapoor has also had the backlash of how he looked so young and the role
wouldn't suit him when Haider was coming out and look how well that film
did. Don't judge if you haven't even seen the movie. I think it will be
great because Nawazuddin Siddiqui will bring out the best in everyone's
acting in the movie. ﻿

Kirandeep Kaur Khurana on Monday, February 09, 2015
The ones commenting about varun's age.. Should know that maturity cannot be
judged by age.. The way he has grown as an actor is remarkable.. The depth
of the emotion he possesses can be seen right in his eyes.. He is perfect
for this role.. And his acting has mesmerised me in this movie., i hope the
movie matches the standards of the music.. :)
Btw.. Awesome song (y)﻿