Video of this song from youtube
Average Rating : 4.00
Total Vote(s) : 12
Please rate this song between 1 star and 5 stars (5 stars being the best). Just move your mouse on the stars above and click as per your rating. Your rating will really help us to improve our website. 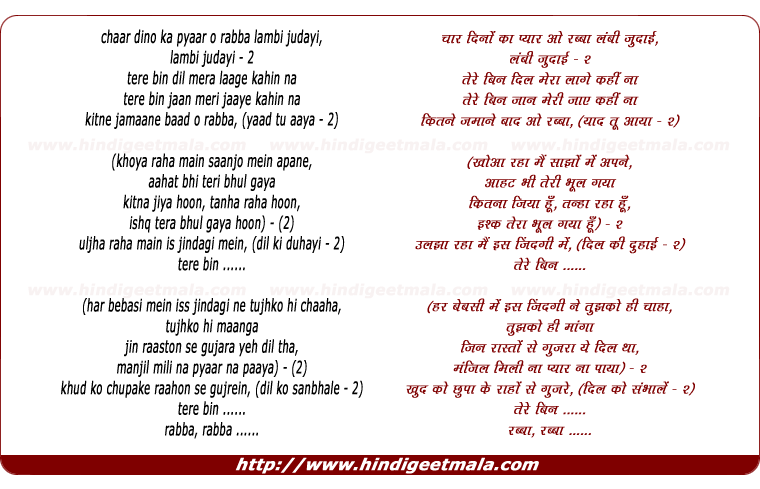 Comments on song "Chaar Dino Ka Pyar O Rabba Lambi Judai Lambi Judai"
shaziaxxx1 on Wednesday, April 14, 2010
loveee thisss songgg!!!! but hey dont refer everything to love... love is just a word that every1 has interpretted wrong and made a joke out off... 3words (i love u) have currupted p peoples minds... take it easy and dont let any1 fool you with them words... the only love u really have is for allah and immediate family... couple love is just not how it used 2 be anymore... its immature lol to the point where even kids appparently think they in love... keep smiling evy1... and yeh great song
candylover131 on Tuesday, May 25, 2010
...lost him for a mistake i did.. i no i hurt him :( everytime i c him get online my heart skips a beat..this song brings bk so many memories.. i hate this feeling.. i cant focus on anything.. this all happened last week.. i kno he wont forgive me.. i just kno it.. n i kno i have to move on.. ugh life seems so difficult right now.. but anyways good song.. been on repeat for the past 3 days
aatayyab on Saturday, July 25, 2009
O' God, love for a few days only
And then, long separation!

My heart does not attach with anyone else
Without you, I can't even die
After such a long time!
I remembered you

I was lost in my own breaths
That I even forgot your footsteps
Whatever I lived, I've been alone
I've forgotton your love
I've been so much tangled in this life
Listen to this heart's plea

BJcapri on Monday, February 01, 2010
larai krne sy na tmhein aaj tk kch mila hai na hmein... blkey apnon ko ganwaya hai, be realistic and u r talkng about wars tu ye tmhare prime minister ka bayan hai hm pak ko kbhi bhi jang sy nhi jeet skte , it can only be won by media... and u did it. don talk about wars, if u dont have sufficient knowledge then don talk
sarahazam86 on Sunday, January 23, 2011
@tinypopy22 Its because India has a bigger market and it launches artists with a big BANG! Like Jay Sean, was popular in Europe and somewhat in the rest of Asia. but with his song "down" launched in America, he is soooo big all of a sudden. Same thing :)