Video of this song from youtube
Average Rating : 4.46
Total Vote(s) : 904
Please rate this song between 1 star and 5 stars (5 stars being the best). Just move your mouse on the stars above and click as per your rating. Your rating will really help us to improve our website. 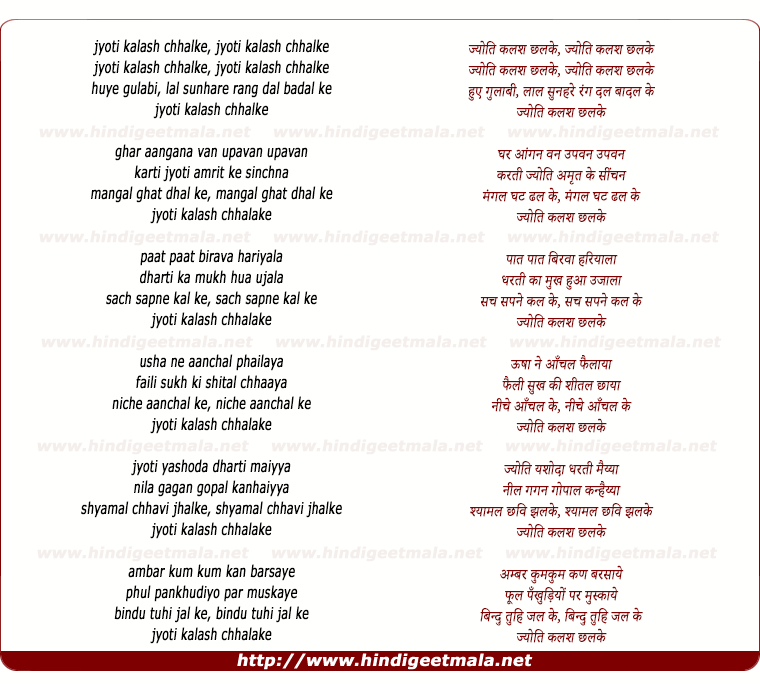 yuanyuanyuanyin on Tuesday, June 01, 2010
- To tell you the truth my dear Professor, when I wanted to dedicate a song but since I do not know the meaning [language], I asked her giving few choices!
Then she selected this song saying ".it is my most fav and the song of welcoming a new dawn , i just adore jyoti kalash chalke."
So this is how it all happened, like in a Hindi film!


Mani Menon on Wednesday, February 13, 2013
I don't know how to thank you, mastkalandr! 'Lakh lakh shukriya' sounds so
hollow! This is one of my favourite Lata numbers. And Meena Kumari is so
beautiful in a 'gharelu' way! Did you know that 'Bhabhi ki Chudiyan' was a
Hindi remake of the Marathi 'Vahinichi Bangdi'? This movie was also made as
'Mangayar Tilakam' in Tamil starring Sivaji Ganesan and Paadmini. Narendra
Sharma and Sudhir Phadke created musical magic with this song! It sounds
fresh to this day, hai ki nahi?