Video of this song from youtube
Average Rating : 4.49
Total Vote(s) : 53
Please rate this song between 1 star and 5 stars (5 stars being the best). Just move your mouse on the stars above and click as per your rating. Your rating will really help us to improve our website. 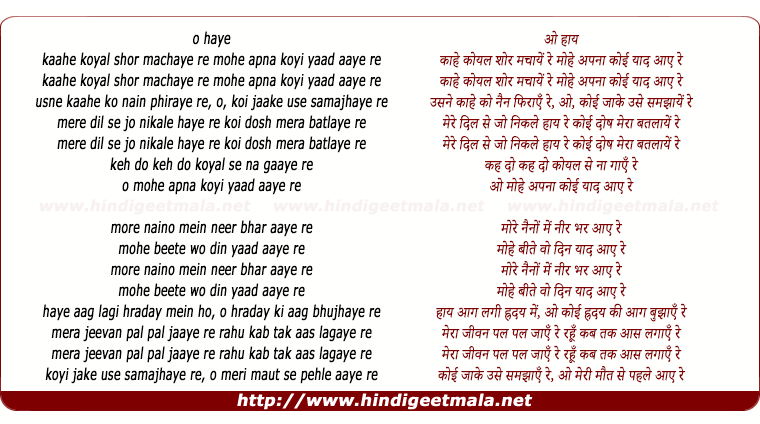 Comments on song "Kahe Koyal Shor Machaye Re"
Sreepada RAMA NAGESWARA RAO on Saturday, April 18, 2015
'kaahe koyal shor machaye re' from film AAG sung by shamshad begham - a
very melodious voice of greaaat shamsad beghamji - one of the most licking
songs for ever.﻿

Madhu Meeta on Saturday, April 25, 2015
Immortal song of Shamshad Begum. Wonderful composition by Ram Ganguly. The
song was so popular that later the tune was used for many parodies.﻿

mauli parikh on Saturday, February 18, 2012
in response to the last comment, please do remember this was 1948 and there
was no intension of these great artists to excite viewers, it was all about
art, in lyrics, in music, in singing and in expressions... Why do we still
love this ?

whilly woffle on Sunday, August 11, 2013
shamshad begum she was born 14/04/1919 a day after the massacre at the
jillanwala bagh by the british army.

Taher Kagalwala on Sunday, January 15, 2012
Very good voice and rendering, but a rather staid presentation in the film
... does not excite the viewer