Video of this song from youtube
Average Rating : 4.59
Total Vote(s) : 29
Please rate this song between 1 star and 5 stars (5 stars being the best). Just move your mouse on the stars above and click as per your rating. Your rating will really help us to improve our website. 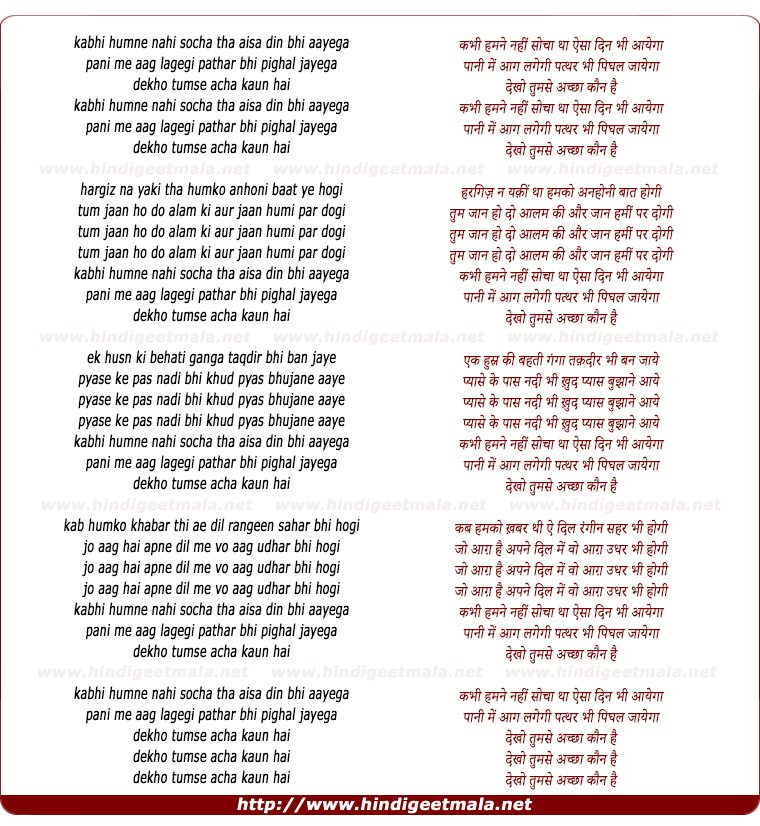 Comments on song "Kabhi Humne Nahi Socha Tha Dekho Tumse Achha Koun Hai"
RealMusicKing on Saturday, August 14, 2010
Common sense explaination is.Rafi either degraded himself by singing cheap songs or he was forced to sing for Shammi Kapoor. Plus, if Shammi's style was so great, how come today's young actors don't copy him? They copy Amitabh Bachin. They copy Dilip Kumar. They copy Dev Anand. If you can answer to this, it would be highly appreciated.
RealMusicKing on Saturday, October 16, 2010
That so called "style" was from "West Side Story" and other western musical films. Shammi had absolutely nothing "signature" about his acting or style. Rafi did have a sense of humour but he didn't have to display it through Shammi on screen.
RealMusicKing on Friday, July 09, 2010
What's so energetic about him? What talent are we talking about? I think when he switched his style starting late 1950's through late 1960's, they should have used him as comedians assistant at the best.
naseem1986 on Thursday, January 01, 2009
wah janab wah kya baat hai. this old song brings back the days of jawani. thank you so much bhai sahab for posting this old great song, this is aman dayani from toronto canada.
jasbongy on Sunday, February 21, 2010
Thanks Shahid ji for this beautiful song of legend rafi ji. 10**
With respect. Sarla.