Video of this song from youtube
Average Rating : 4.47
Total Vote(s) : 431
Please rate this song between 1 star and 5 stars (5 stars being the best). Just move your mouse on the stars above and click as per your rating. Your rating will really help us to improve our website. 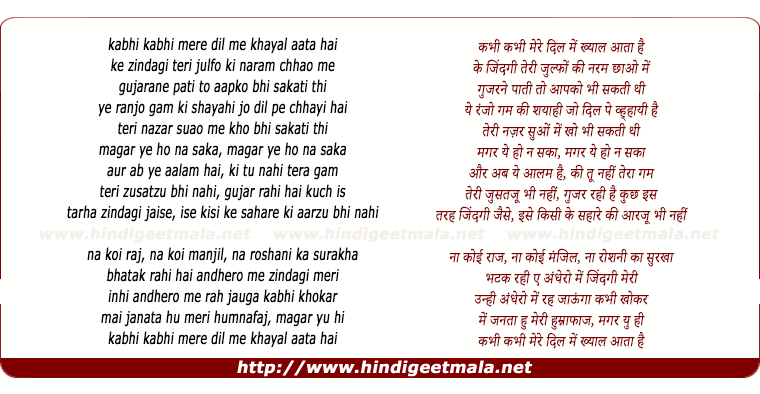 DilDaar S on Monday, January 11, 2010
Your singing/song is surely enjoyable & flawless. Comparing it with
original is difficult since I did not try to sing it so I dont know the
original song well . Your singing & music was smoother, original is
powerful/impulsive. I am no expert . Best wishes.

Twinkle DownWorld on Friday, May 21, 2010
i love this song i know this is an old song. it proves that the song wheter
it's old or new the song which is old will be reverse that the song will be
the best. eg see me only the girl who dislike the oldest song now i am
liking it.

AJAY PANDEY SAHAAB on Thursday, December 17, 2009
matchless,eternal classic by sahir.its the best one can say for his /her
beloved.its magical poetry and divine music.sahir and khayaam created this
best ever romantic song

Samardha Kumar on Thursday, June 14, 2012
Evergreen song.. This song will be liked even after 50 years.
View all 16 comments related to song Kabhi Kabhi Mere Dil Me Khayal Aata Hai (Amitabh)