Video of this song from youtube
Average Rating : 4.30
Total Vote(s) : 1468
Please rate this song between 1 star and 5 stars (5 stars being the best). Just move your mouse on the stars above and click as per your rating. Your rating will really help us to improve our website. 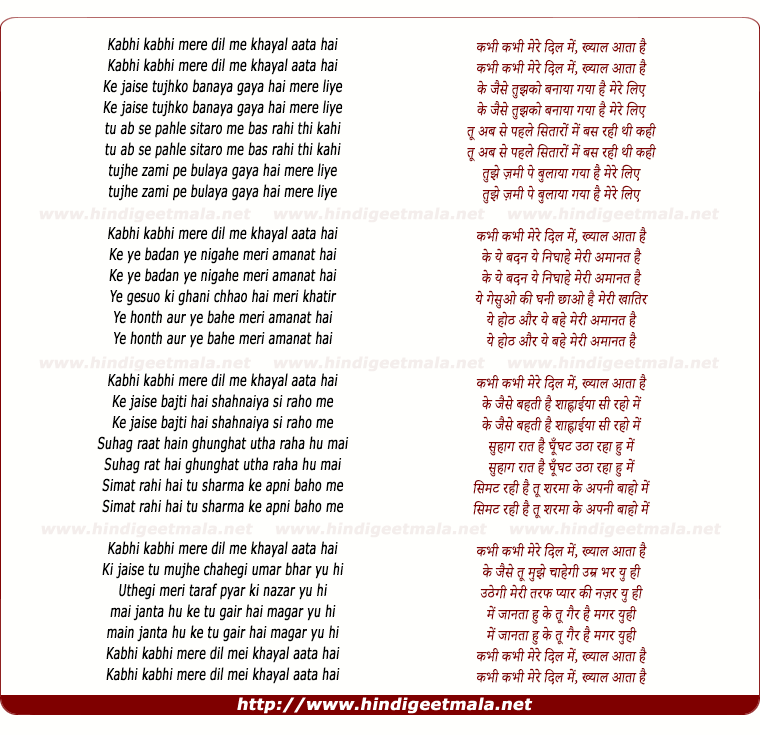 Comments on song "Kabhi Kabhi Mere Dil Mein"
AKNoorani on Sunday, December 18, 2011
even if we will say that this movie is based on the real story of sahir ludhyanvi saheb so this is not a doubt about this,,bcoz this whole film says the story of that Great writer,, he loved his mother too much, when his mother died,aftr few days he also died,May Allah gave him a peace in his grave,bcoz Sahir gave unforgettable songs to indian film industry,like ye desh hai veer jawano ka,,kisi pathhar ki moorat se,,mai zindagi sath nibhata chala gaya,,jane wo kaise log,Etc,,this space is 2short
AKNoorani on Sunday, December 18, 2011
i read mostly all books of sahir ludhyanvi saheb he was a great man and great friend,i m a big fan of his shayri and lyrics of all indian film songs,the main thing was tht in his songs he always wrote meaningful songs for human beings,,when singer mukesh sung this song nd he came back to his home,,he said to his wife today i sung that song,,,the generation of generations will sing that song,,,,so this song is Kabhi Kabhi,,,this is also noticeable, mukesh saheb sung this song by heart..Aijaz Khan
AKNoorani on Sunday, December 18, 2011
The Great writer of this song(Sir Sahir Ludhiyanvi) Was the great writer of indian film industry he wrote this song for his love first, but he gave this song to this film,director was so impressed by this song so he put his movie name also"kabhi kabhi"..in College time of sahir he was in love with a girl she was also a writer but not like sahir ludhyanvi,,,that girl married to another one so sahir ludhyanvi didnt make his marriage in his whole life...even he was an only child of his mother,,
deepakaswani17 on Monday, August 24, 2009
(trying my best)
(kabhi kabhi mere dil mein khayal aata hai ki jaise tujhko banaya gaya hai mere liye )At times i feel from my heart that you were made only for me.
(tu ab se pehle sitaron mein bas rahi thi kahi tujhe zameen pe bulaya gaya hai mere liye) you used to be the one among the stars in the sky but came onto this earth for me only
(Kabhi kabhi mere dil mein khayal aata hai, ke yeh badan yeh nigahein meri amanat hai) Attimes i feel from my heart that you your eyes are for me.