Video of this song from youtube
Average Rating : 4.52
Total Vote(s) : 130
Please rate this song between 1 star and 5 stars (5 stars being the best). Just move your mouse on the stars above and click as per your rating. Your rating will really help us to improve our website. 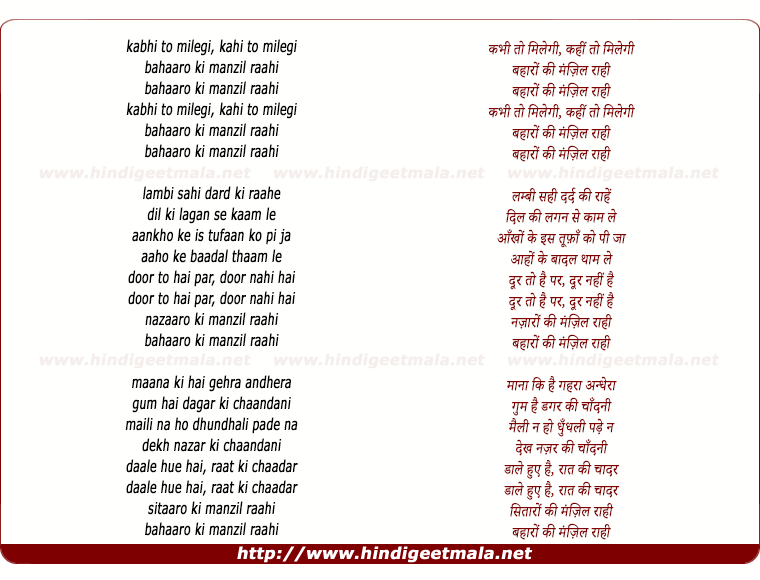 Comments on song "Kabhi To Milegi, Kahi To Milegi, Baharo Ki Manzil"
orientlover1 on Tuesday, June 22, 2010
Meena Kumari in what appears to be the easiest role of her film career. She does not appear to be "acting" at any point during the movie rather homely talk with other characters. Must have been smooth sailing for this great actress. Her role in two other movies released the same year (1962) : Main chup rahoongi & Sahib Bibi aur Ghulam were much more complex and emotional. We still miss that great actress after almost four decades of her death
Rmehtacpa on Saturday, December 24, 2011
@jab23756 Simple, turns out to be very BEAUTIFUL. For instance Sadhana
almost always looked so PRETTIER whenever she was presented with least of
makeup. See her in many shots of film Parakh, PremPatra, AsliNaquli and
some others and one would recognize the BEAUTY, beauty of simplicity.

Rmehtacpa on Saturday, May 23, 2009
When young really very young most of them look pretty. And then, make-up,
directed expression, angle of camera all enhenced the look on screen. Don't
get me wrong, after all the inherant natural part of individual face indeed
is a factor. Rm

Voltairec on Tuesday, May 11, 2010
Dhoor tho hain par dhoor nahin hain..crystallized in one line.what
heights of expression, rendered as usual in Didi's magical
voice...beguilingly picturised!