Video of this song from youtube
Average Rating : 4.42
Total Vote(s) : 24
Please rate this song between 1 star and 5 stars (5 stars being the best). Just move your mouse on the stars above and click as per your rating. Your rating will really help us to improve our website. 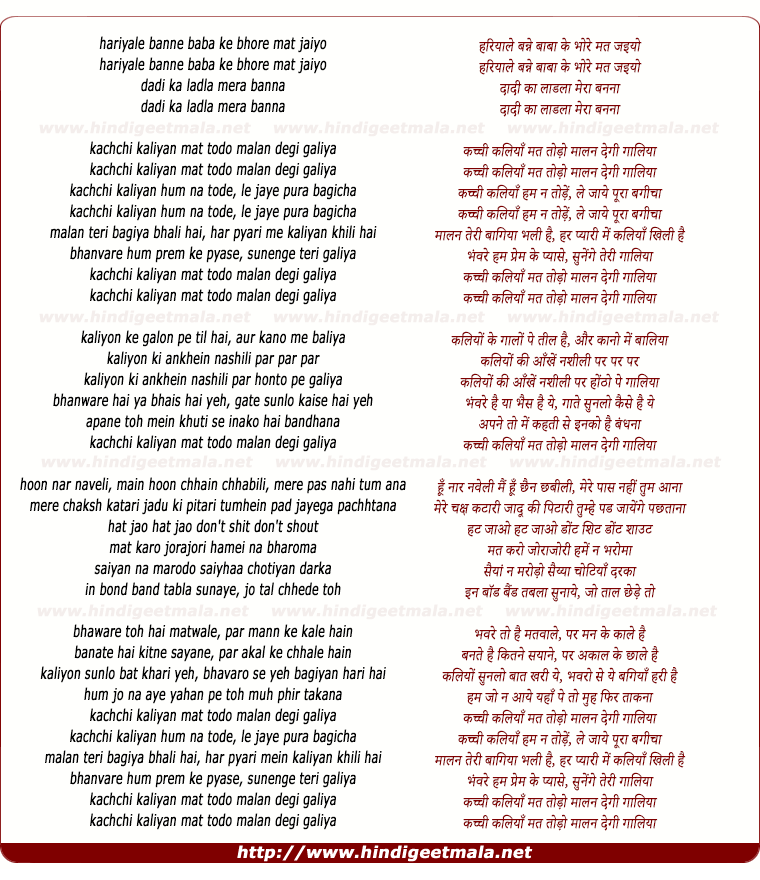 Comments on song "Kachchi Kaliyaan Mat Todo"
chatnoir60609 on Saturday, March 20, 2010
People like you just can not understand that life in the real world is
nothing like life on the movies. Are Rani and Preity best friends??
obviously not, even when they have great chemistry working together. People
who thinks that this couples -SRK/ Kajol, Abh/Rani- should get married just
because they have "chemistry" on screen are selfish and living a dream
through it. Please!!! How could you know if you don't even know this
actresses and actors. It's their happiness, their desicion.

alphathalassima on Friday, December 24, 2010
no , there were two movies for aish and abhishek , waaays b4 umrao jan , i was like : oh my god !! actually aish likes him and he is comfortable with her ! u can tell if u were over with the so filmy things , and went to see in between ... I was like : THEY SHOULD GET MARRIED !! .. and years later ! voala !

aish in real life is more suitable for AB, while rani is boring for real and always have the same look , maybe ppl were thinking the opposite but no one is in their hearts to know !

ajbarish on Monday, January 31, 2011
Hi from Romania ! I miss the old Bollywood music too. On the other hand, this song is a remake of an old one whose title I don't know, unfortunately. I heard it sung by a singer whose voice sounded like one of an old man.He was accompanied by a women's choir. I wish I could see this movie. I have seen some scenes on You Tube and it seems very well-made and realistic. Let alone Rani Mukherjee is one of my favourite actresses.
chatnoir60609 on Saturday, March 20, 2010
I'm sorry but that's not true. Aish is very good too, versatile as an
actress, and is better dancer than Rani. Even when Rani is great and maybe
Rani is a little bit better actress. Also, by successful he/she means
family status, not success in the industry. And plus, Abhishek was and is
nowadays in love with Aish. People should stop their false ilussions about
Rani. Aish and Abhishek look perfectly happy together.


Seda Sor on Monday, March 22, 2010
Well there is nothing that you can do okay, people may see the chemistry of
rani abhishek and should be together. It's just that God is saying they are
not meant to be together in real life. Or maybe Rani is not interest or who
knows. You see real life is completed different than what it is in movies.
When Ash and Abhishek are marry, it's God saying they made for each other.
So think about it.