Average Rating : 4.50
Total Vote(s) : 10
Please rate this song between 1 star and 5 stars (5 stars being the best). Just move your mouse on the stars above and click as per your rating. Your rating will really help us to improve our website. 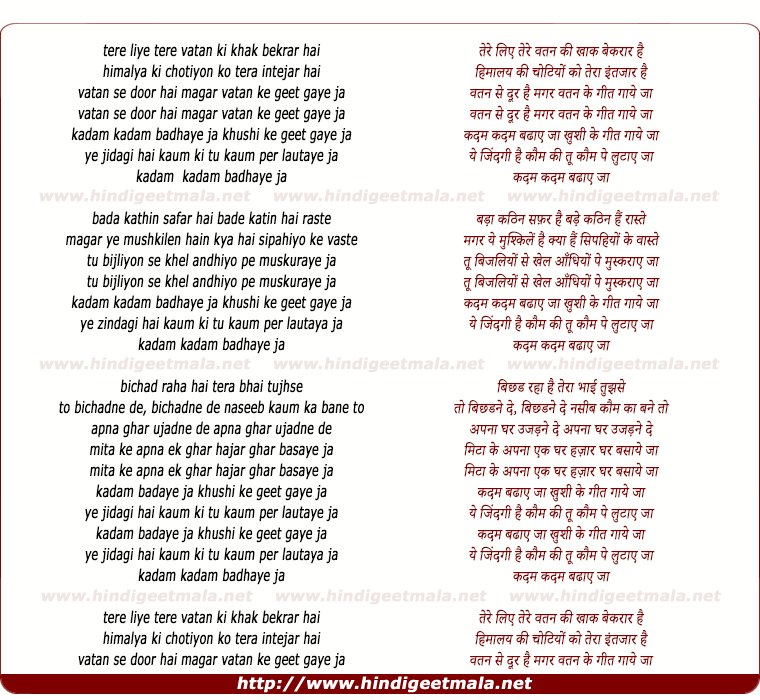 Comments on song "Kadam Kadam Badhaye Ja"
Calm Water on Friday, March 06, 2009
Step by step advance towards your goal, Singing songs of Joy.. This life -
it belongs to the people Sacrifice it for the masses! Dust of your nation
is eager to meet you The peaks of Himalaya is waiting for you. If your
brother is separating let it be If your house is ruined let it be You will
save thousand houses by letting your ruined. Onwards to Delhi!" - goes the
cry, Cradling the flag of the revolution, We shall plant it on the Red
Fort, And our flag shall flutter in the sky!

Proudofbeingaman Xo on Saturday, January 12, 2013
I am glad we lost the 1962 war against China. As a nation, India learned
its very first lesson in international politics i.e. superficial promises,
backstabbing, and realization that we as a nation were defeated. No true
Indian shall ever let go of the pinch this defeat gave us. Remember it long
than you remember 1971 victory, and be ready for the day we give our
brother China a deserving reply.

Ishita Biswas on Monday, January 23, 2012
@eumelvillage Thanks! Appreciate you showing respect. World peace is not
that hard to imagine as John Lennon did. But this violence was very much
necessary for our independence. PS: I personally love Germany and want to
visit there someday. :-)