Video of this song from youtube
Average Rating : 4.33
Total Vote(s) : 167
Please rate this song between 1 star and 5 stars (5 stars being the best). Just move your mouse on the stars above and click as per your rating. Your rating will really help us to improve our website. 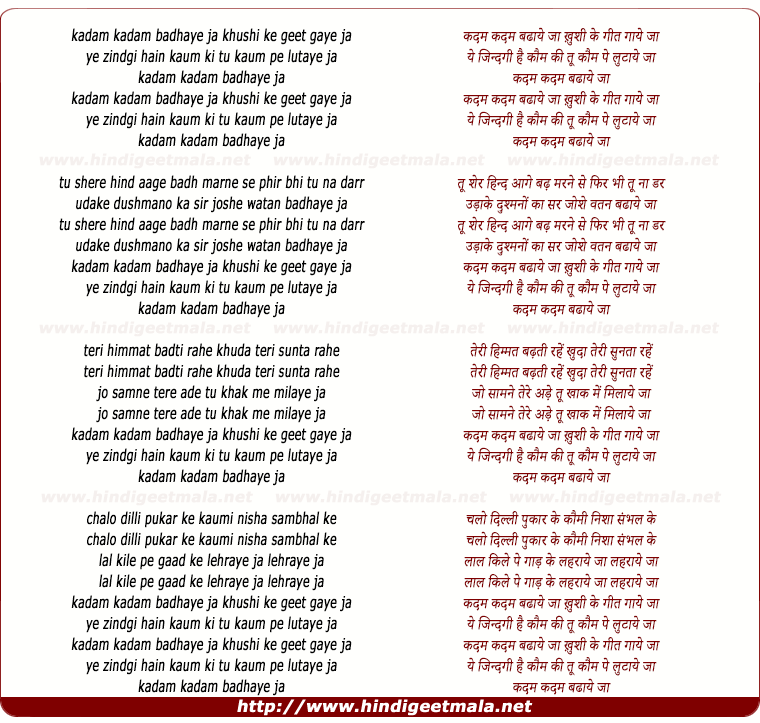 Comments on song "Kadam Kadam Badhaye Jaa"
SanJ922 on Friday, April 01, 2011
I'm sorry to say this, but Gandhi's movement did secure independence.
Netaji was still a great leader and a powerful orater, and I'm sure with
the support he was promised he could have accomplished his goals, but he
didn't. We can't sit here and argue over whether one was better than the
other, because they were both working for a common goal. Jai Hind!

sap123singh on Friday, April 09, 2010
Just imagine a single man flying at that time to germany and japan. Forget about the past, even today congress is not ready to consider him a great martyr. The bottom line is that congress has literely killed the reality. NETAJI, WE LOVE YOU AND WE THE PEOPLE OF INDIA DO ACKNOWLEDGE YOUR EFFORT AND SPIRIT TO SEE INDIA FREE.
Harish Naik on Wednesday, November 11, 2009
netaji you are my hero, i admire and respect you. you shown the real path
to the late coward people. who said you are forgotten hero????? you are in
our heart forever.

montychandra on Saturday, May 14, 2011
@rosaliewhite26
In fact greater than Gandhi.
Yes, that's the tragedy of India, my friend.