Video of this song from youtube
Average Rating : 4.09
Total Vote(s) : 235
Please rate this song between 1 star and 5 stars (5 stars being the best). Just move your mouse on the stars above and click as per your rating. Your rating will really help us to improve our website. 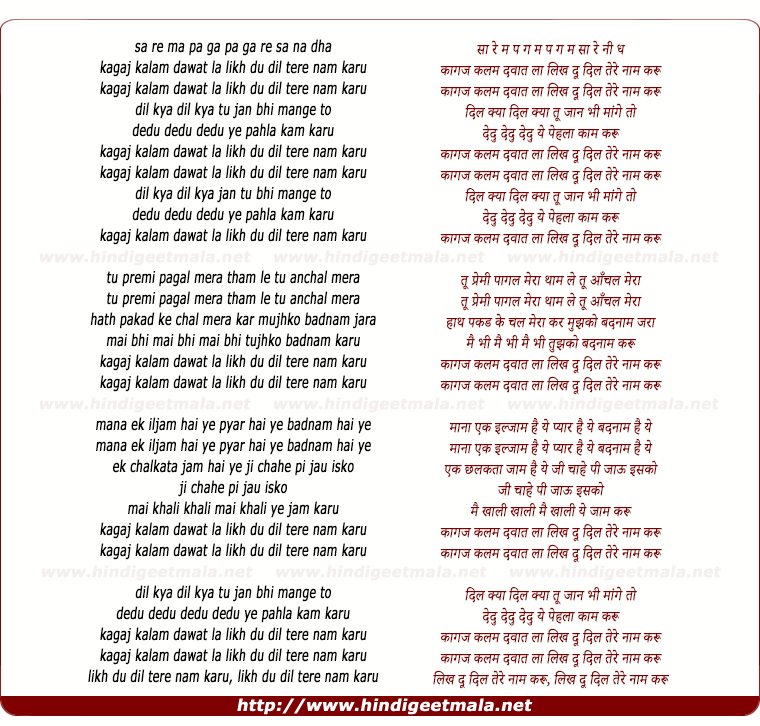 Comments on song "Kagaz Kalam Davat La Likh Du"
yuvraj01 on Saturday, May 07, 2011
@vivek0418 Actually that is not technically true, what about SHABBIR KUMAR
who attended the funeral in 1980 of Rafi and had his pen apparently fall
into the the burial spot where Rafi saab would be laid to rest, hence with
the movie Coolie in 1982/83 he began the job to take on the rafi mantle,
all of them, Mohammed Aziz, Shabbir Kumar, Anwar (the guy who sang the
famous track from '92 Heer Ranjha) all set out to take on Rafi's spot in
Bollywood.yet all 3 barely lasted a decade..

ARUN KUMAR Gupta on Sunday, May 16, 2010
Bahot sunder geet hai... Beautiful song.. but the situation is not proper,
instead it could have been picturised in a Hilly snowy location of
Himalaya, would have suited more for such a romantic song. -Arun, Bombay,
India. +919869812652

ziggygoinsik on Monday, March 09, 2009
hu is the singer i love his songs man can u let me no. thanks fr the
download its the only download of this song an i wanted to find it an
thanks to u i have