Video of this song from youtube
Average Rating : 4.55
Total Vote(s) : 131
Please rate this song between 1 star and 5 stars (5 stars being the best). Just move your mouse on the stars above and click as per your rating. Your rating will really help us to improve our website. 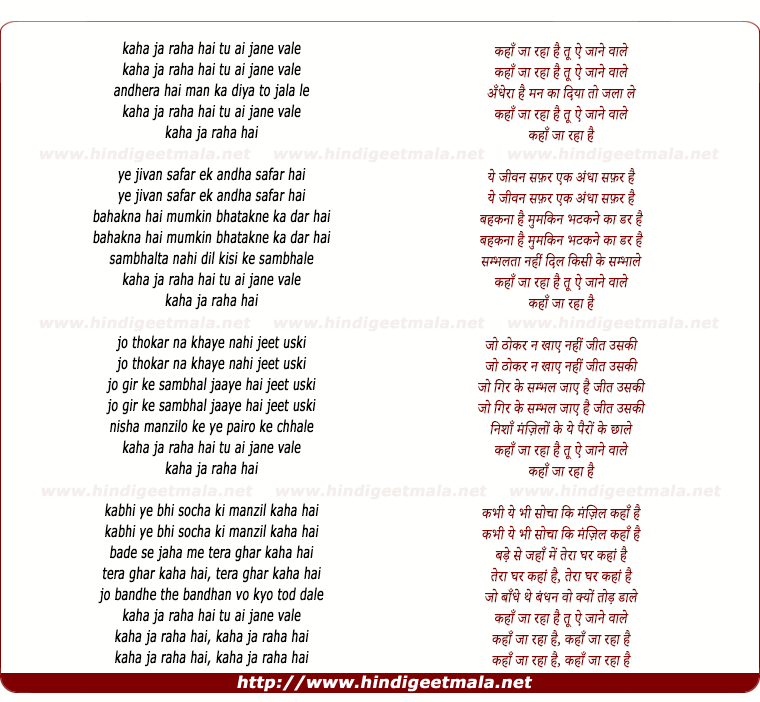 Comments on song "Kaha Ja Raha Hain, Tu Aye Jane Wale"
prabhu shankar Purohit on Tuesday, September 01, 2015
we can understand the philosophy of life in this song,I am speechless to
admire Rafi sb the great lyrics penned by Hajrat sb andShailandraji with
divine feeling, based on rag Desh, immortal song,Composed by Shankar
Jaikishan,Versaltile acting by Balraj Sahani and Nutan,very popular song in
1955.﻿

Manik Dey on Saturday, May 23, 2015
Cann't think of any other singer singing this song with so much authority
and audacity. Rafi , tussi Great ho . Immortal Rafi .﻿

Subash Nijhawan on Saturday, August 25, 2012
One of the best Songs That can Make a dejected Man look up with Hope .
Great Actors Balraj Sahni saab and Nutan ji .