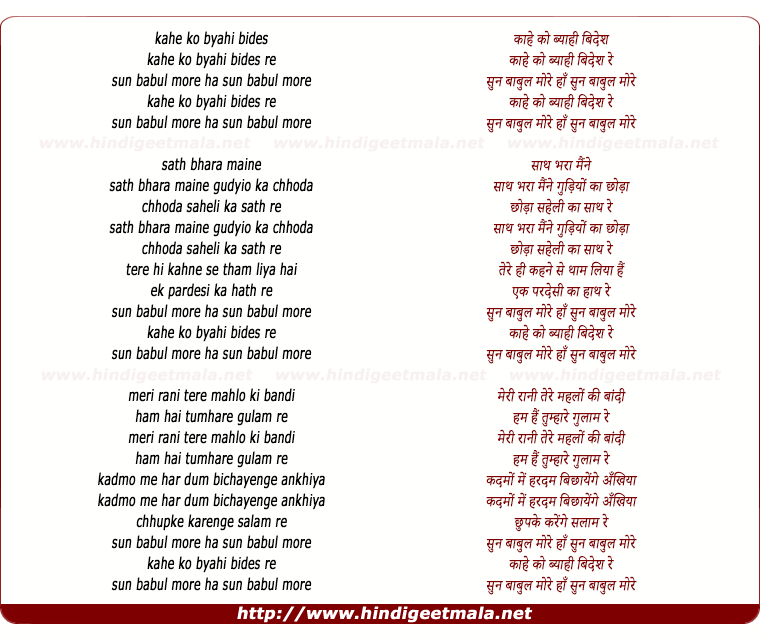 Comments on song "Kahe Ko Byahi Bides"
Pashambay Baloch on Tuesday, February 22, 2011
I requested for this song but later I visited your channel and pleased to
note that it is already uploaded by you. This is 1948 song which was
initial years of Lata career. So virginility in her voice is evident. She
was struggling at that period but thanx to Master Ghulam Haider and Aziz
Khan who gave her chance. Aziz Khan was a brilliiant composer. He then
changed his surname from Khan to Hindi. His other films are Actor, Danka,
Dhoop Chawon etc. Regards Pashambay Baloch Karachi

Priya MyMusicalHeaven on Saturday, November 08, 2014
A moving and utterly sweet rendition. Of course, we expect these qualities
when the singer is Lataji, and the song is in her early voice. Thanks for
having uploaded this old song on your channel.﻿

tmjatala on Sunday, December 25, 2011
A precious gem of our great past . Listened first time and enjoyed a lot .
Lata is matchless .

Basheer Ahmed Khan Azeemi on Thursday, February 24, 2011
@Pashambay Thanks for the informative comments and visiting my channel ...
Deepak Chowdhari on Monday, May 21, 2012
rare and gem of the gem song . thanks.
View all 6 comments related to song Kahe Ko Byahi Bides