We will add as soon as the video of the song is available.
Average Rating : 4.28
Total Vote(s) : 320
Please rate this song between 1 star and 5 stars (5 stars being the best). Just move your mouse on the stars above and click as per your rating. Your rating will really help us to improve our website. 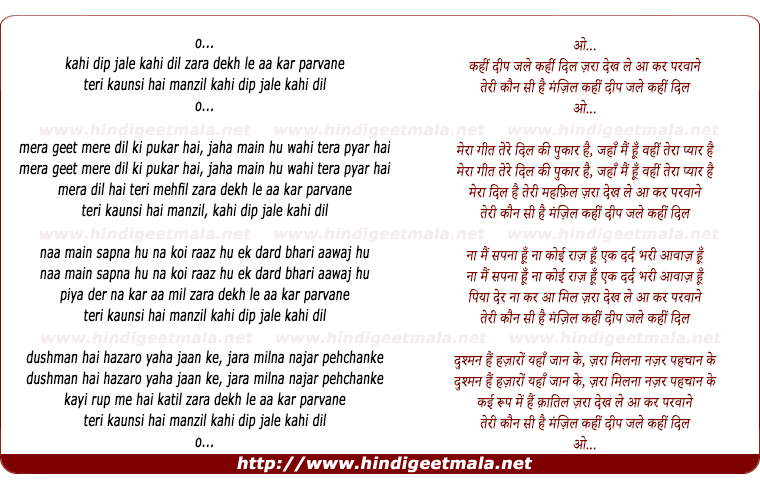 Comments on song "Kahin Deep Jale Kahin Dil"
aramuskguy on Friday, June 11, 2010
This song has a unique place in the history of Hindi film music and also
Lata's career. Sometime in the early 60's, Lata had fallen so ill that
many, including Lata herself, feared that she would lose her voice! But
Lata recovered and she returned to playback singing soon enough. And, this
song was the FIRST one she recorded after coming back...A song that proved
to everyone including Lata herself, that she could sing as well as ever.
God did not want to snatch the nightingale's golden voice!

V. Siddhartha on Monday, June 07, 2010
HK, Lata , and Biswajeet here capture the haunting atmosphere of the
episode shown in a manner similar to the one accompanying the song Aayega
Aanewala immortalized by Khemchand Prakash, Lata, and Ashok Kumar in Mahal(
1949). The latter's quality remains matchless, of course, but this one is
also very good. Thanks , sakibali786.

crazyoldsongs on Tuesday, October 06, 2009
yes sir , it is extraordinarily hauntingly beautiful in lataji's sweet
sweet voice like nectar . and hemant da's music which keeps on echoing in
our minds long after listening to it . this particular verse used to be
missing in old records. thanks a lot for this unparalleled gem .

rumahale on Saturday, January 31, 2009
Thanks. It is all the interest that really matters. Your appreciation of
the song do suggest good interest in oldies. I would have posted more, but
for the copyright /licence issues troubling regularly. Believe me, my
account was removed on this score but fortunately I am back.

SPChitale on Friday, February 26, 2010
fantastic suspense movie with each and everyone contributing his best. Hemantkumar's composition in perhaps Raag Sohoni and Lata's voice +Vaheeda's acting and not the least Manohan Krusna's acting all unforgettable.
View all 112 comments related to song Kahin Deep Jale Kahin Dil