Video of this song from youtube
Average Rating : 4.32
Total Vote(s) : 56
Please rate this song between 1 star and 5 stars (5 stars being the best). Just move your mouse on the stars above and click as per your rating. Your rating will really help us to improve our website. 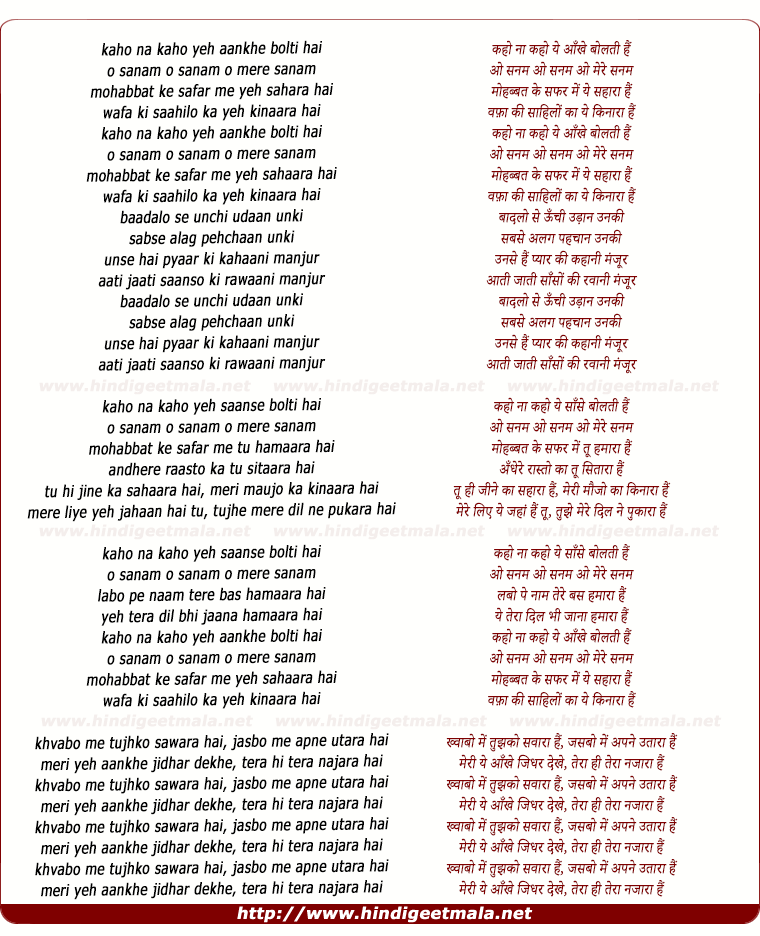 Comments on song "Kaho Na Kaho Yeh Aankhe Bolti Hai"
ostehapsforever on Monday, April 27, 2009
i love this song this is my favourite song. beautiful. but the music video is not. they could make it much more beautiful like the song. great lyrics
thebattleofcanae on Wednesday, April 27, 2011
@priyesh350 1.21 Billion Indians Vs. 360 million arabs worldwide (Most of
whom are now allowed to access youtube, google, facebook or the like. In
addition, a lot of the hits are for Mallika Sherawat, not for the song.
And, I always endorse original works and abhor copies so hits on these
sites are not an accurate benchmark. The artist can sing well as he can
traverse all octaves, hold a high note long enough and mix multiple
instruments. The composition is brilliant and few artists can do so.

theknowledgeseeker on Friday, October 31, 2008
hey dwarflock...I agree that both songs are great...and everyone should
just enjoy it...just wondering I'm trying to learn this song also...and
what did you mean by the "ruined the Arabic"...cuz i did notice that the
Arabic part of this Hindi version sounds different than the origianl Arabic
version as far as pronunciation wise

Farah Zina on Wednesday, July 18, 2007
wat fish will sit dere listening to the song and think..."hmmn indians are
breaking the law"...listen to the song and be happy man...be happy that ur
tunes are bign brought into other cultures...jus like indians get happy
when r&b stars use bhangra or indian beats...its standard stuff!

DJKhal21 on Wednesday, August 22, 2012
Good song, but after I heard the original Arabic version, I give the slight
edge to the Arabic one. Arabic language is just more powerful & more
heartfelt