Video of this song from youtube
Average Rating : 3.69
Total Vote(s) : 13
Please rate this song between 1 star and 5 stars (5 stars being the best). Just move your mouse on the stars above and click as per your rating. Your rating will really help us to improve our website. 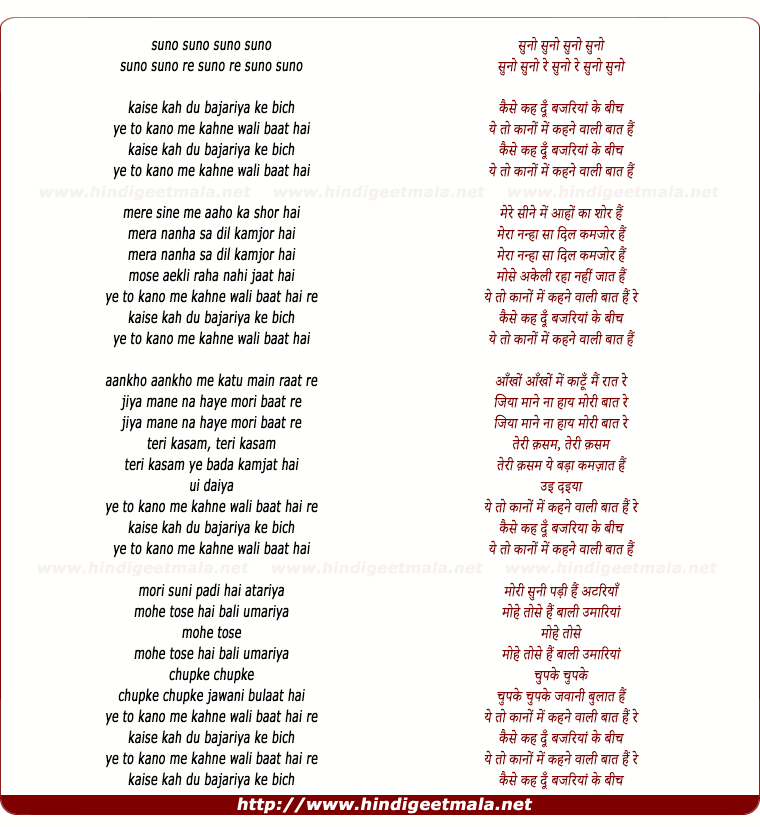 Comments on song "Kaise Keh Du Bajariya Ke Bich"
nandi4crc on Tuesday, April 30, 2013
Anil Da was one of the fathers of Hindi movie music. A self made genius. In
his interview with Amin Sayani he gave several reasons for leaving Bombay
and it seems the foremost was his disenchantment with the prevailing mores
of the industry. Prsonal tragedies also played a big role in that decision.
I think he was and continues to be showered with accolades from all who
come across his music.

rumahale on Sunday, October 30, 2011
"suno suno... kaise kah duun bajariyaa ke biich" hearing for the first time
and instantly developed love for it. As learned BharatGul ji puts, it is
cute and sweet. Full credit to Anil Da and Lata ji. Thanks for revival of
this rare gem. [Lyrics by Nazim Panipati]

Bharat Gul on Sunday, October 09, 2011
What a cute song ! And, of course, Lataji is always sweet; that's pretty
much a given each time. Heard for the first time. Thanks, Ajay.

otsirk17 on Tuesday, April 02, 2013
The under appreciated Anil Biswas. He did not get his due from Hindi
films. Maybe, masses did not go for his music as they were not feet tapping
numbers. Further, the duo SJ were making inroads into the film road with
the blessings of the showman RK. A disenchanted AB left the film industry
and joined the AIR as its director. Neither his wife Meena Kapoor made it
in films. She had a very beautiful voice but she lost out to the koel Lata.
Thanks . A beautiful song.