Video of this song from youtube
Average Rating : 4.24
Total Vote(s) : 49
Please rate this song between 1 star and 5 stars (5 stars being the best). Just move your mouse on the stars above and click as per your rating. Your rating will really help us to improve our website. 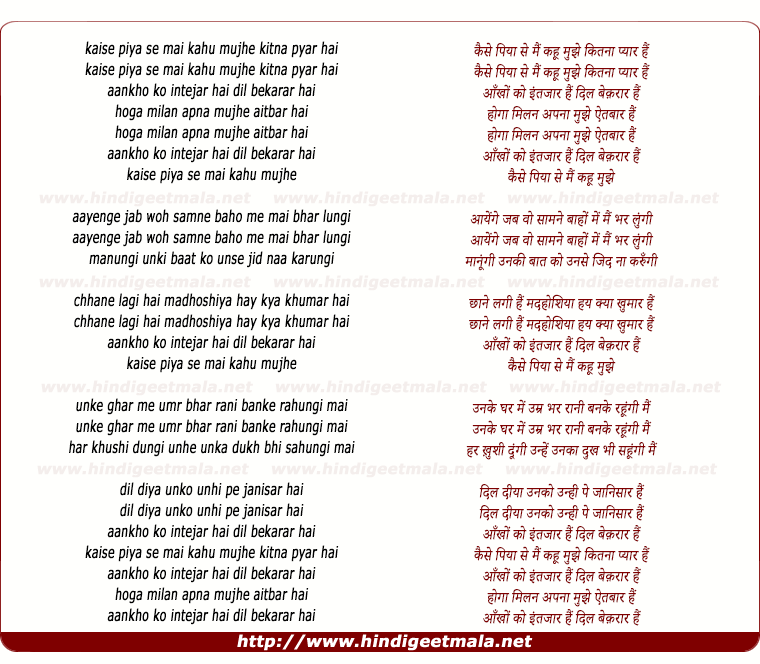 Comments on song "Kaise Piya Se Mai Kahu"
Seda Sor on Friday, November 06, 2009
when i watch the movie, i really didn't care much about this scene, i was
pretty much listen to the song instead. I still admire this singer from the
oldies, the lengendary Lata Mangheska, sorry if I spell her last name wrong.

trisha rattan on Saturday, February 20, 2010
Kareena is soo nice i love her love her acting and all her movies ..stop
saying things about her if you dont like her dont go and look at her

mbrocs13 on Friday, July 18, 2008
without alot of makeup she looks really pretty but also without
makeup..yikes. lol but here it was perfect and she looked sweet.

roniniko130 on Saturday, December 06, 2008
Amazing Lataji! As Alkaji said once, even when Lataji sings for some
ordinary-looking actress, the actress' face starts looking beautiful. This
is so true here. Kareena looks charming in this video.