Video of this song from youtube
Average Rating : 4.68
Total Vote(s) : 41
Please rate this song between 1 star and 5 stars (5 stars being the best). Just move your mouse on the stars above and click as per your rating. Your rating will really help us to improve our website. 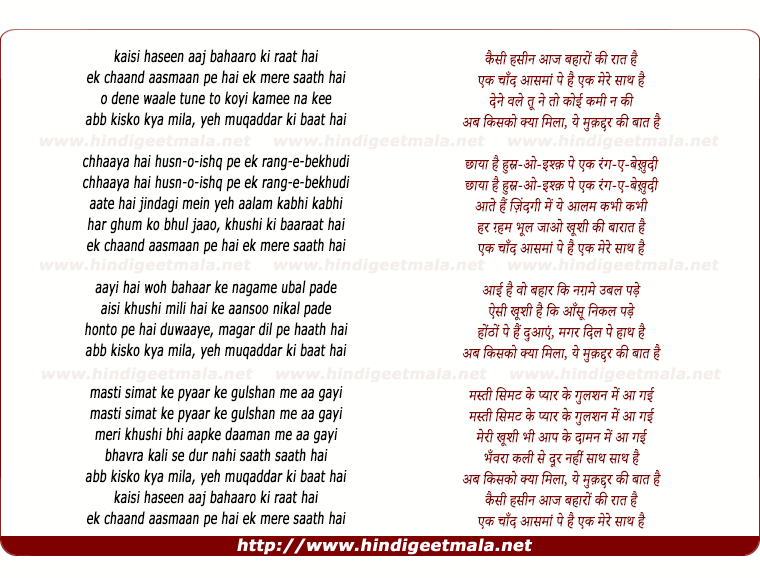 Comments on song "Kaisi Haseen Aaj Bahaaro Ki Raat Hai"
RealMusicKing on Friday, June 25, 2010
Originally, Naushad picked Rafi and Talat for this song. Manoj refused to be playbacked by Talat. Despite all the pleas from producer, Naushad and Dilip Kumar, Talat was replaced by Mahendra Kapoor. But Talats voice remained on the Master Tape at HMV.
Jagjit Singh Ishar on Thursday, December 11, 2014
Talat's voice never suited on Manoj Kumar. I have heard many Talat songs
picturised on Manoj especially Suhag Sindhur. The voice never matched the
character & here in this case the Talat version was very weak so Talat had
to be replaced by Mahinder. It doesn't mean that i dislike Talat, i have
many Talat sung songs as my favorites. But some people are showing
disparage to Mahinder on the basis of religion. The fact remains that
Mahinder Kapoor is one of the best singers of Bollywood & so is the gr8
angel Rafi sahib. Let us not compare singers & give due regard to them.﻿

Juvenile Delinquet on Tuesday, November 22, 2011
This song clearly shows the greatness of Muhammad Rafi Sahab. Mahindra
Kapoor tried hard to copy the legendry Rafiji, but failed miserably. In an
interview M.D.O.P.Nayyar said that in most of his songs, he used to be very
bessurra and i had recorded that with me and whenever he would boost that
he sang like Rafi, i would let him hear that besurra song of him. O.P.
Nayyar said thet he clearly told MK that there can never be another Rafi.
Rafi clearly has overshadowed MK, in this song. Rafi GR8

reverseswing on Friday, March 23, 2012
It is true that Manoj Kumar didn't accept Talat Mahmood's version of this
duet and MD Naushad yielded to Manoj Kumar's pressure. Manoj wasn't against
Rafi although he preferred Mukesh and Mahindra Kapoor's voices for his
films. I think it is not a good practice to change the singer (once the
song is recorded) on the basis of personal likes and dislikes of actors.
Here in this case both Talat and Mahindra were the victims due to the
unrealistic attitude of Manoj Kumar.

Narasimhan Srinivasan on Tuesday, July 10, 2012
Manoj Kumar was clearly aware that he owed his success to Rafi in his
earlier romantic films including Sawan Ki Ghata where Rafi did all play
back for him. It was because of this success that Manoj Kumar went on to
become an independent producer and director. It is true that Talat,
howsoever great singer he might have been did not have a voice suitng Manoj
Kumar. Manoj Kumar's gratitude to Rafi was proved by the fact that he was
present at Rafi's funeral. Clear hai??