Video of this song from youtube
Average Rating : 4.00
Total Vote(s) : 10
Please rate this song between 1 star and 5 stars (5 stars being the best). Just move your mouse on the stars above and click as per your rating. Your rating will really help us to improve our website. 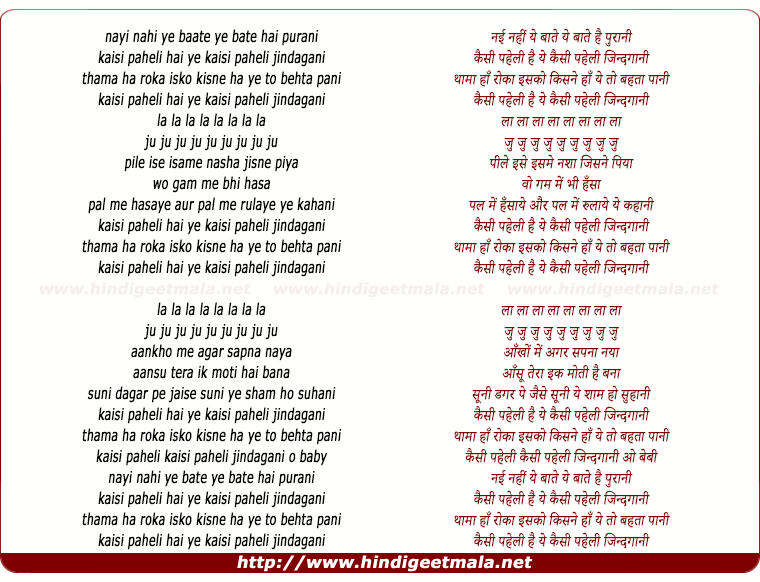 Comments on song "Kaisi Paheli Jindgani"
Dilip S. Coulagi on Tuesday, August 11, 2009
Maybe the tune was copied - or we can just say 'adapted'...nothing
new in Hindi film music. What matters is how well it was done and how does
the song stand on its own. By those criteria, this song is so
beautiful..wonderful rhythm, lilting singing (who sang it??) and
lovely poetic lyric - all one can want. BTW who gave the music? And who is
the poet?

aymirala on Tuesday, December 28, 2010
@bluewhale14 It wasn't copied; they had the rights. I grew up with jazz
music and I started screaming in the theatre that this was A Kiss to Build
a Dream On! So embarrassed when I went home and wikipediad it.I must say
I do like Louis's version better though.

Dilip S. Coulagi on Tuesday, August 11, 2009
OK, I found the music is by Shantanu Moitra, and it's sung by someone whose
singing I love: Sunidhi Chauhan. Astonishing that on Wikipedia where all
other info is available, the poet's name is not mentioned.so my
question remains: who wrote the lyric?

nepalipari2004 on Saturday, September 20, 2008
this song is soo beautifull...
Old style...Rekha is just beautiful azz always... She has the exact same gorgeousness when she used to play in the 1980s. Just extraordinaire.

sabbirsa on Monday, February 28, 2011
wow rekhaji. whats the secret to your eternal beauty? I think every actress needs to know. and nobody could carry off this better than you. so elegant, beautiful, expressive.
View all 52 comments related to song Kaisi Paheli Jindgani