Video of this song from youtube
Average Rating : 4.43
Total Vote(s) : 30
Please rate this song between 1 star and 5 stars (5 stars being the best). Just move your mouse on the stars above and click as per your rating. Your rating will really help us to improve our website. 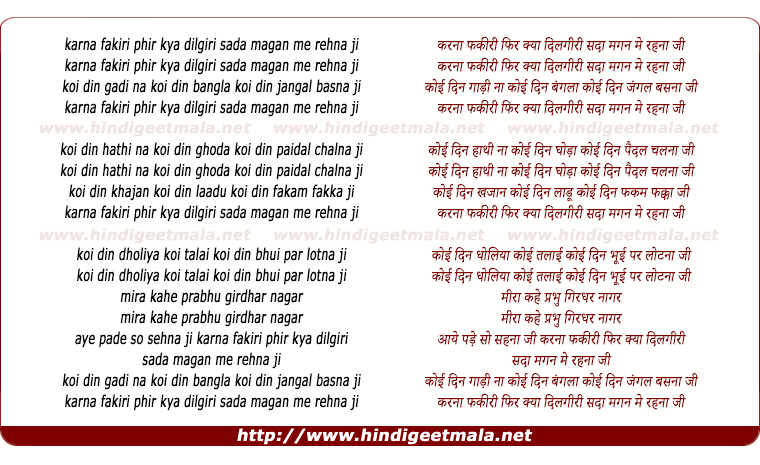 Comments on song "Karana Fakiri Phir Kya Dilgiri"
Ashok Kumar on Saturday, November 12, 2011
In this particular poem, meera reveals out that getting indulged in
worldly/Bodily pleasures makes no sense as one has to depart from them one
day. By way of example she says that one rests on a big pillow one day, on
a bed but ultimately one day, he has to lay down on to the ground forever.

Ashok Kumar on Friday, October 28, 2011
Awesome.I thought that i could enjoy such a beautiful song. This song of
meera bai reflects her hatred towards wordly pleasures. She intellectually
argues that one has to be immersed in the devotion towards lord as one day
he has to leave everything which he loved throughout his life.

Pragna Bhatt on Wednesday, March 10, 2010
Beautiful Song...very meaningful...endure what comes in your path and you
will reach krishna