Video of this song from youtube
Average Rating : 4.52
Total Vote(s) : 385
Please rate this song between 1 star and 5 stars (5 stars being the best). Just move your mouse on the stars above and click as per your rating. Your rating will really help us to improve our website. 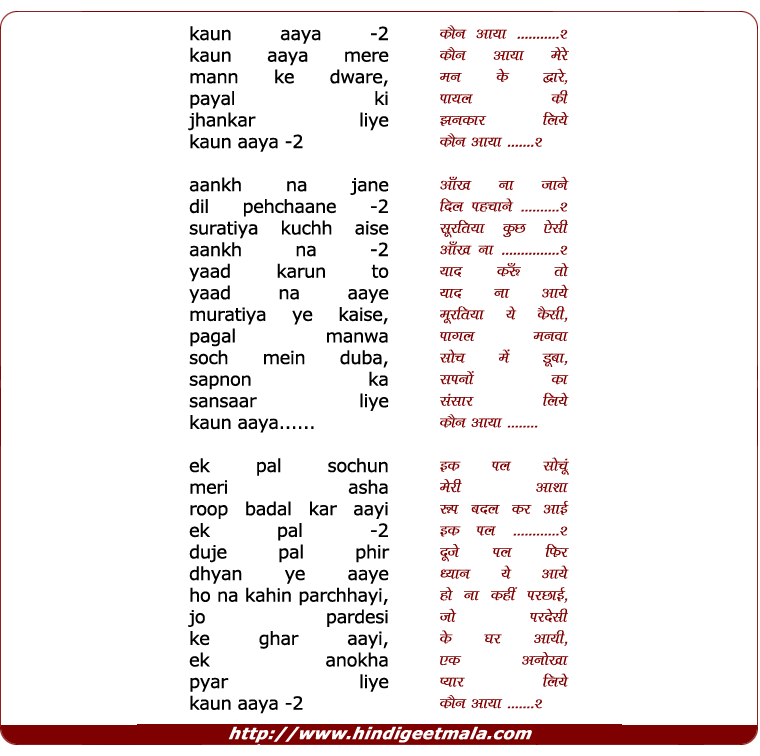 Comments on song "Kaun Aaya Mere Mann Ke Dware"
Hiren Patel on Tuesday, September 25, 2012
You may be right about this particular song Mr. Mozmuder that Talatji would
not have created the same impact.But both are different singers and had
their own style of singing.The same could be said about a song of
Talatji,"Hai Sabse Madhoor Wo Geet Jinhe Hum Dardke Surme Gaate Hai" and
Mannada woud not have been able to have the same depth in that song! I
respect Mannada tremendously and regret that he was not utilised by the
composers to his fullest.But Both Talatji & Mannada were great singers

Archisman Mozumder on Sunday, September 23, 2012
With due respect to Talat Mehmood, he would not have been able to create
the same impact that Manna Dey did in this song. This is not a soft
romantic number but a brisk, honey-laden tune that has some convolutions
which only Manna Dey could have negotiated among his contemporaries.

Hiren Patel on Friday, October 05, 2012
Thanks for viewing and for nice information about Madan Mohanji,but i feel
he has composed many songs which has a stamp of M.M. and gazal composed by
him are praise by all the famous musicians of his time.Yes he was not used
to the fullest.

Hiren Patel on Wednesday, January 02, 2013
You are right Vithalraoji as Anup has done a great job in acting,after all
he blongs to one of the prominent fraternity of our golden age Indian
Cinema of famous Kumars,Ashok,Kishore and Anup.