Video of this song from youtube
Average Rating : 4.80
Total Vote(s) : 5
Please rate this song between 1 star and 5 stars (5 stars being the best). Just move your mouse on the stars above and click as per your rating. Your rating will really help us to improve our website. 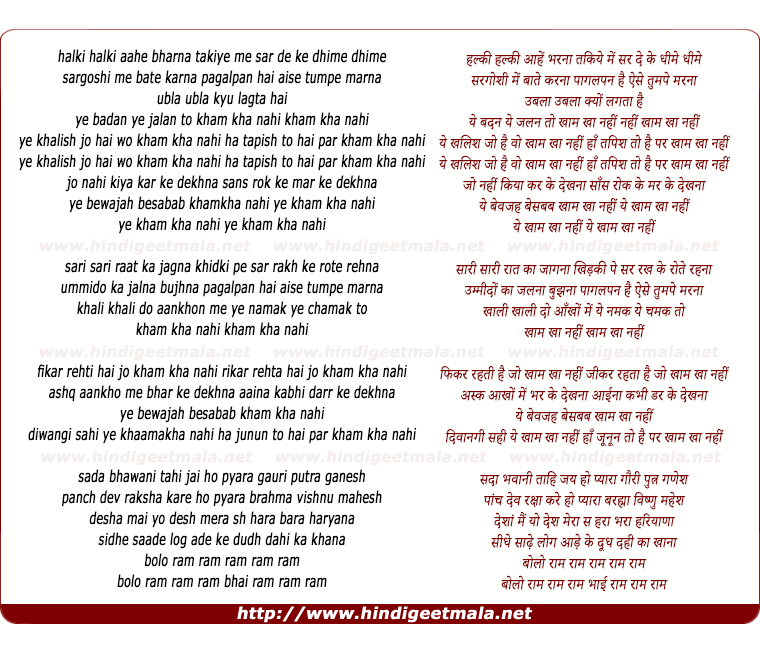 Comments on song "Khama Kha"
ranixxfan on Tuesday, January 15, 2013
This film was flawless. Hilarious, emotional, romantic and totally insane!
Imran's best performance. His chemistry with Anushka was sweet and natural.
Pankaj Kapoor was beyond words. 100% reccomend. To all those critics going
on about how this film is SO hard to understand-what on earth is wrong with
you? You shouldn't be reviewing films but childrens books-they might be
simple enough for you to get.

Hridyesh Gupta on Sunday, January 13, 2013
Beautiful song!! I really loved the fusion of Hriyanvi folk part in the
end. Thanks Rakesh writing the lyrics and making it easier to understand
the last part :)

jefffjazzz on Thursday, June 13, 2013
gulzar sir at his best n vishal what a mixture of soft romantic music with
indian fusion & songs end on a zulu african note.

Arohan Konwar on Monday, December 31, 2012
Nice song from bollywood after long and it has to be the same man Vishal
Bhardwaj! Thumbs up for this soulful composition!